Now that the election is over, investors should position their portfolios toward the stocks that will benefit from a Trump presidency. Bank stocks have been among the market’s best performers since the election. 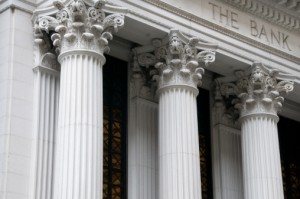 There could be even further gains in store, as the biggest banks still offer lots of value and income potential. Despite a recent rally, bank stocks are still cheaper than the S&P 500 on a P/E basis, and they offer solid dividend yields as well.

There are a number of potential catalysts boosting bank stocks right now, which could last well into the new administration. Here are three bank stocks to buy now that will thrive in 2017 and beyond.

As the biggest mortgage originator in the U.S., Wells Fargo will benefit greatly from rising interest rates. The Fed recently raised rates for the second time in 2016, and the U.S. central bank could pass through as many as three rate hikes in 2017.

Continued rate hikes would be a positive catalyst for Wells Fargo, and the company could use a boost. It is performing well ̶  earnings per share and revenue both beat analyst expectations ̶  but the company still faces significant headline risk from its fake accounts scandal.

Wells Fargo incurred a $185 million fine this year for creating fake accounts, without customers’ knowledge or approval. The scandal culminated in the resignation of Wells Fargo’s CEO. The mess tarnished Wells Fargo’s brand reputation with consumers, and could make for an ugly fourth quarter. As a result, investors are looking forward to a much better year in 2017.

Wells Fargo stock still presents a good value among banks stock to buy. The stock trades for a P/E of just 13, and offers a solid 2.8% dividend yield.

Any tailwinds for the banking industry are sure to benefit JP Morgan, the nation’s largest bank by assets. JP Morgan does not have as significant of a presence in mortgages as Wells Fargo, but it will surely be rewarded from any deregulation efforts.

President-elect Trump has indicated his desire to repeal—or at least meaningfully scale back—recent banking regulation such as Dodd-Frank. With a Republican majority in Congress, the incoming administration could be successful in deregulating the financial industry.

This would be a real catalyst for JP Morgan. Judging by the stock’s 22% rise since the election, it appears investors are optimistic as well.

JP Morgan already has some momentum heading into 2017. Last quarter, the company beat analyst expectations on both the top and bottom lines. JP Morgan earned $1.58 per share and $25.5 billion in revenue. Analyst estimates were for JP Morgan to earn $1.39 per share on $24 billion of revenue.

Bank of America stock has been on fire since the election. The stock has returned 30% since Nov. 8.

Investors are excited because it appears the bank is finally turning things around. Bank of America has been weighed down by high levels of legal expenses. It is hoped that a return to deregulation could relieve some of the regulatory pressure on the company’s bottom line.

And, the core banking units are beginning to grow. Last quarter, revenue and net interest income each rose 3% year over year.

Bank of America saw positive results across all four of its core businesses last quarter.

There could be further room for Bank of America to run, because the stock is still cheap. Shares trade for a P/E of 16. Multiple expansion in addition to earnings growth could fuel double-digit annualized returns moving forward, even after the recent rally.

And, Bank of America stock pays a 1.4% dividend yield, which is a nice kicker to total returns, and making it one of the bank stocks to buy now.