What camp are you in?

I believe almost everyone will buy gold at some point – but for most people, it will be later, at much higher prices.

That’s because the dollar (and other world currencies) are chasing their tail right now. You can’t print yourself out of global recession – no matter how big your printing press is, or how many PhDs you have on the board of your central bank.

There’s no machine that can turn political will into wealth.

Political will CAN, however, turn ones and zeros into currency units. We’re not running out of political will to do the wrong thing – and of course there’s no shortage of ones or zeros.

Meanwhile, there’s plenty of evidence that the introduction of MORE currency units tends to increase prices of many dollar denominated assets.

We know that when the Federal Reserve increases the supply of dollars in existence, the price of gold tends to rise along a similar trajectory.

Just take a look at this chart, which shows money supply (in billions on the left side) against the price of gold in dollars on the right: 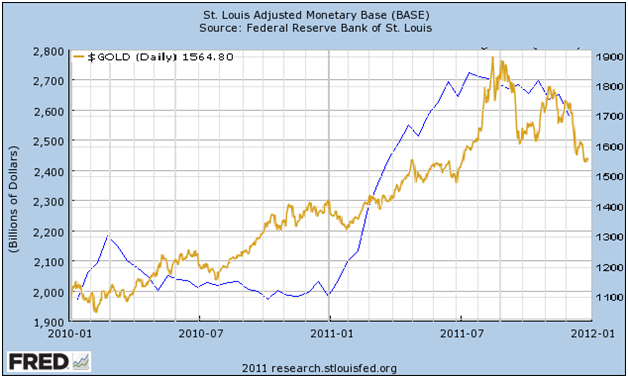 Now, we also know that there’s plenty of political will left to will more dollars into existence. In fact, there’s no practical limit to how many dollars the Fed will create.

To put things in perspective: the Fed created trillions of dollars over the past few years – essentially DOUBLING the amount of dollars between 2005 and 2011.

It shouldn’t be too surprising that gold about doubled over that same period.

What’s surprising is that more people haven’t come to the conclusion that holding dollars puts their hard-earned capital in direct harm’s way, should the Federal Reserve decide to double money supply again.

My prediction? Gold will loosely follow the supply of dollars until such a point that the relationship between dollars and gold ceases to be informative.

I hope you own gold before that point.

P.S. If you haven’t had a chance: check out my colleague Andy Crowder’s free upcoming webinar on how to safely collect income without buy or selling stocks.