Many investors view the fiscal cliff as a key impediment to economic growth and higher stock prices. Once the fiscal cliff is resolved – likely with sufficient compromise to irritate both political sides – the economy and stocks will move ahead.

There is some truth to this line of reasoning: A fiscal cliff resolution will remove an overhang of uncertainty that is darkening investor mood and incentivizing corporate executives to hold a record level of cash – at $2 trillion.

Despite the chatter and concerns of businesses throttling back investment plans, the fact is that business have been investing since we began pulling out of the recession in late 2009. Moreover, business investment is the reason we are no longer in a recession.

As the graph below reveals, as private business investment goes so goes job growth and the economy. Contrary to popular belief, investment drives the economy, not consumption. 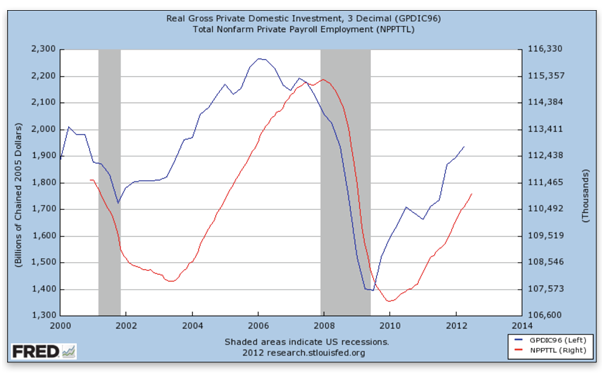 With American corporations sitting on a mountain of cash, I'm convinced the level of investment could easily approach 2006 levels once the uncertainty of the fiscal cliff is removed.

To be sure, corporate executives remain fearful that failure to resolve the fiscal cliff will push the economy back into recession. If a deal isn't reached by the end of the year, consumer and investor confidence will suffer, which will obviously impact corporate profits.

That said, it's important to focus on cash, because cash is a sterile asset. Yes, cash is a store of value, but it doesn't create a positive return for investors. Businesses make money by investing, not by holding cash balances.

Because of the unprecedented level of corporate cash, I see a tremendous opportunity in 2013.

One trillion dollars (or more) of potential business investment points to significant job and economic growth down the road.

In the meantime, I think it's worthwhile to double-down on the market.

Today's elevated level of uncertainty has created opportunity by depressing asset prices. When we factor in the 1,000-point drop in the Dow Jones Industrial Average, it would appear there are significantly more opportunities to buy good companies at more favorable prices.

In my own research, I've been finding more value – particularly in income investments – which I've been vetting for the High Yield Wealth portfolio.

As for the portfolio itself, despite the strong sell-off in equities this month, the investments in the portfolio continue to operate profitably, generate cash flow, and pay and raise dividends. I have seen no indication that will change.

I know these are unsettling times. The good news is they won't last. I expect the White House and Congress to strike a deal before the end of the year (and even if a deal is reached after January 1, it can be made retroactive). The deal won't be perfect, but it will lower uncertainty, because business and consumers know what they are confronting going forward, and can plan accordingly.

When that occurs, expect corporate America to begin investing its cash hoard in earnest, and watch the economy and stock prices move higher.