It’s been estimated that stocks spend up to 80% of the time doing absolutely nothing. And that means most of the time your investment money is just sitting there, trapped between short-term support and resistance.

A channel is the trading range defined by resistance and support. Channels can be upward, flat or downward sloping.

Naturally, investors want to own stock in an upward channel and sell in a downward channel. Flat channels are ideal for short-term traders.

Though recognizing channels is easy, it takes time to follow large numbers of stocks. Because it’s difficult to follow hundreds of stocks, many analysts will watch the indices to gauge trend, biasing them for new trade setups. While many are bearish and believe the market is about to top, this index shows us to stay bullish. 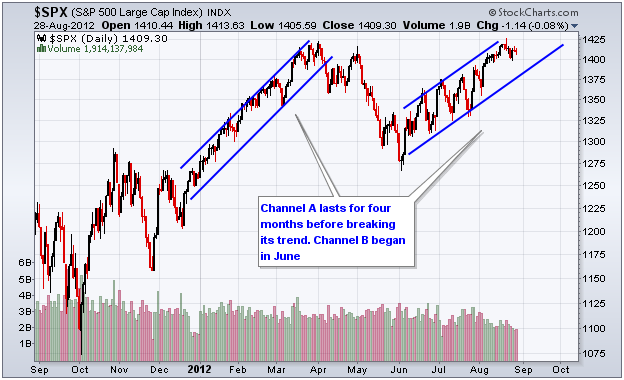 The S&P 500 Index (SPX) is the most widely used because it’s exposed to all sectors and sizes of stocks.

Right now, the index trades in an upward channel. Though these channels can and will break down, it’s best to buy stock when the S&P 500 is in a bullish channel, optimally at a support area.

The index formed a similar channel to start the year. Any trader who watched that channel stayed a buyer through March and profited handsomely. A sell signal was registered when the SPX broke below the channel during the first week of April, warning of the decline that eventually unfolded into June.

By June, the index had recovered and started a new upward trend. More importantly, the index will remain in an upward trend until the bottom blue line of support is broken, indicating investors should have a bearish outlook.

Once that channel is broken to the downside all bullish bets are off. Bearish investors may also want to start selling positions.

I will maintain my bullish trading bias until I see this channel fail. After that breach, I will focus on volume, as well as the 1,355 support area, to determine if it’s best to short stock.