At the end of the day, there's one thing I look for in a mining company – production growth.

This is the key ingredient to a successful precious metals investing recipe. Grow production steadily and a lot of the other things – high profit margins, revenue growth and funding for exploration – fall into place.

But don't grow production and, well, I'm not too interested.

Take Endeavour Silver (NYSE:EXK) for example. In 2009 the company produced 2.6 million ounces of silver. With two mine expansions, production grew to 3.3 million ounces in 2010 and will likely hit 4.3 million in 2012. The share price has risen 210% since mid-2010. But those who bought when production just began in 2004 have seen their position grow 10-fold. 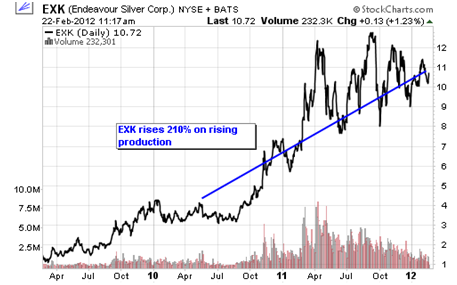 Because production growth is so important – and is likely to dictate which way a company's share price goes – you've got to understand where a mining company is along its life cycle before you jump in.

This is pretty easy to do because mining companies tend to follow a fairly distinct growth curve. In the early stages of life these companies are primarily explorers – they're out in the field looking to acquire and explore properties that may have valuable ore deposits. Canadian explorer ATAC Resources (ATC.V) falls into this category.

Explorers have no revenues and rely on the debt and equity markets for necessary capital. Some of these companies are attractive investments, and offer huge upside potential if they can get a property to development stage. They also can carry higher risks since they don't yet have cash flow, permits, and proven reserves.

On the opposite end of the life-cycle spectrum are established producing and silver streaming firms.

These are relatively stable companies, but they don't have the same upside potential as the explorers. That's because it takes exponentially greater production and estimated reserve base to justify a big increase in share price.

In between the explorers and the producers are the developers. This is the sweet spot for investors.

These companies are developing productive assets and just starting to generate stable revenues from selling silver, gold, and other metals.

These are the best companies to buy because their risk-reward profile is so attractive. They are currently (or just about to) producing gold and silver so they have immediate leverage to precious metal prices now, not at some ambiguous point two or three years down the road.

They are generating revenues (or are about to) and are becoming profitable – two things the market loves.

These revenues also help emerging producers fund exploration of undeveloped properties. So the exploration upside is huge, but there is less risk than with a non-producing explorer.

The emerging producers have immediate, mid-term and long-term upside. But they also have some downside protection.

For me, this is about as good as it gets.

Fortuna Silver Mines (TSX: FVI) is one of my favorite emerging silver producers and a best pick for 2012. Silver production from the company's second mine – this one in Mexico – should be a major positive catalyst for the stock.

I've also recently recommended an emerging gold producer in Africa. I expect this stock to do as well as both Endeavour and Fortuna over the coming years because of its new production. I can't release the name because that wouldn't be fair to paying subscribers. But if you're interested in a great gold growth story, you can try a trial subscription here and learn more about this company.

My advice – keep it simple and focus on gold and silver miners that are growing production. These are the ones that can lead to life-changing gains.