I interrupt the usual gold love fest that goes on in this space to call your attention to silver. Yes, gold is on a major run right now. But silver’s recent ascension is making the yellow metal look like a boring blue-chip stock.

The price of silver has risen 13.6% in the last month. On July 24, silver spot prices were right around $27 an ounce. Today silver is going for $30.68 an ounce – and showing no signs of slowing down.

Look at this chart from the past month – particularly the move silver has made over the last week or so: 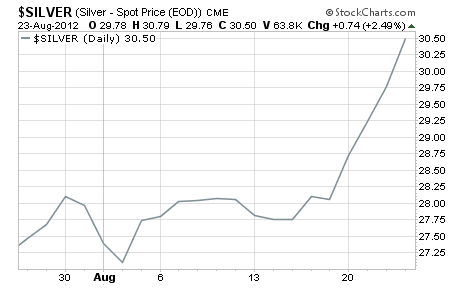 Eight days ago, the price of silver had barely budged since late July. Nearly all of its gains came in the last week-plus.

But those moves pale in comparison to what silver has done, rising 9.5% in the last five days alone.

The latest move has pushed the price of silver above $30 an ounce for the first time since early May. And it appears the rally isn’t over.

What’s causing the latest run-up in metals? And why is silver ascending at double the speed of gold or copper?

The answer to the first question appears to be a familiar one: the Fed.

Quantitative easing has proven to be a very good thing for gold and silver investors.

What Federal bond buying does is flood the market with liquidity and thus pushes down the value of the U.S. dollar. Since metals typically move in the opposite direction of the dollar, gold and silver get a boost.

Just look at what the dollar has done in the last month while gold and silver have been rising: 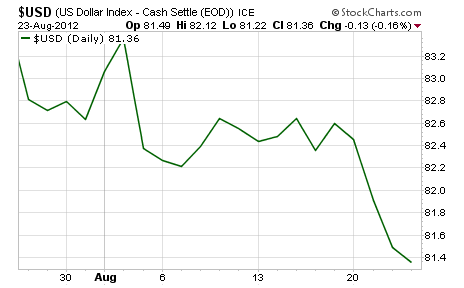 Returning to my second question, though: Why is silver rising so much faster than gold?

Well, that’s generally the way it’s been since quantitative easing was first implemented.

On a percentage basis, silver has been outpacing gold for close to four years now. The fact that it’s doing it again is nothing new.

As your regular Resource Prospector Kevin McElroy has been preaching for months, gold should continue to rise as the value of the dollar sinks.

But silver should rise even faster.