The Federal Aviation Administration (FAA) issued an experimental airworthiness certificate to one of Amazon’s (NASDAQ: AMZN) research and development units yesterday. The permit marks the first major step toward reality for the Amazon drone program. 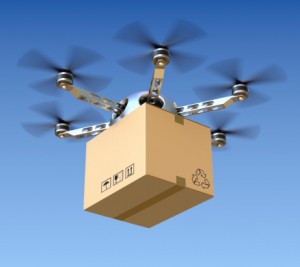 Why might Amazon – owner of Amazon.com, Audible, Zappos, Amazon Web Services, IMDb.com, Pets.com and more – be interested in developing a drone program?

The reason is really quite simple.

Successful retailers know that removing a consumer’s purchasing barriers will lead to more sales. If you are Amazon CEO and founder Jeff Bezos, you know that one of your biggest challenges is getting items in the hands of your customers when they want the items. Sometimes they want the item “right now,” and you simply can’t offer it to them at this moment in the company’s development.

That could all change with the Amazon drone program.

Imagine that you place an order and pay a premium for “same-day delivery by drone.” Your order jumps to the front of the queue in the fulfillment center. The robots that run the warehouse – acquired when Amazon bought Kiva in 2012 – then pick your item off the shelf and deliver it to the drone hangar. Your item is fastened to one of Amazon’s drones and it is cleared for takeoff.

Hours or even minutes later you have your item.

That is something Amazon and other e-commerce sites simply can’t offer right now. And it is one of the main advantages brick-and-mortar stores have over Amazon.

We’ve been talking about the Amazon drone program for some time now. Amazon has previously said that it was testing several drones inside of a building in Seattle. Thursday’s announcement from the FAA that it had issued a permit to Amazon is a big step, as it will allow for Amazon drone program tests to be conducted outdoors for the first time.

The permit issued to Amazon by the FAA is not without restrictions.

Amazon must keep its drones below 400 feet and keep them in sight at all times. Amazon drone operators must maintain private pilot’s licenses and maintain active medical certifications.

Perhaps the trickiest rule attached to the FAA’s permit is that only one test drone has been cleared for liftoff. Amazon must obtain permission every time it modifies that test drone or wants to fly a different drone.

I’m guessing that we’ll learn a lot more about the Amazon drone program next week, when its vice president for global public policy testifies before congress during a hearing focused on drone policy.

Meanwhile, investors are left with some key questions.

Until we see the program in action, we can only wonder if it’s worth the undisclosed millions Amazon is spending on its development. Will investors really reap the rewards?

Amazon is working with the National Aeronautics and Space Administration (NASA) on a system for managing drone traffic. As such, there is likely to be a whole lot of societal good that comes out of the Amazon drone program, especially considering how an automated network of cargo delivery by drone could change the world.

But should Amazon investors pay for the development of such a program? And will Amazon’s “delivery by drone” program prove to be worth the investment required to develop it?

Only time will tell. I personally wish to avoid Amazon stock during its continued period of heavy investment and reinvestment.

In general, I think investments like the Amazon drone program will pay off – eventually. That said, I think that payoff is years away and doesn’t justify Amazon’s current premium valuation.