The end of the dollar’s supremacy as “world reserve currency” is on an irreversible path towards destruction.

This important status gives (or used to give) the United States a practical blank check in the foreign exchange and global trade markets.

It used to be that everyone from the largest sovereign nations down to the lowliest international shipping merchants had to conduct business in dollars. Like a busy airport, that made the dollar a hub for nearly every international transaction – and it gave the United States immense power to print and spend as many dollars as it wanted.

But that status is quickly eroding.

Just last month, I wrote about how China and Japan began to trade between themselves with Yuan and Yen instead of dollars.

Today, Turkey is buying oil from supposedly “blockaded” Iran not with dollars, or even Turkish or Iranian currency – but instead with gold…

And while most people are content in believing that the dollar as reserve currency is a permanent construct, I’m obliged to point out that reserve currencies don’t last forever – nor do they last very long in terms of human history. Just between 60 and 120 years or so. Barely a lifetime!

Today, the dollar’s reign nears the end of what you might call an average lifespan for a reserve currency: 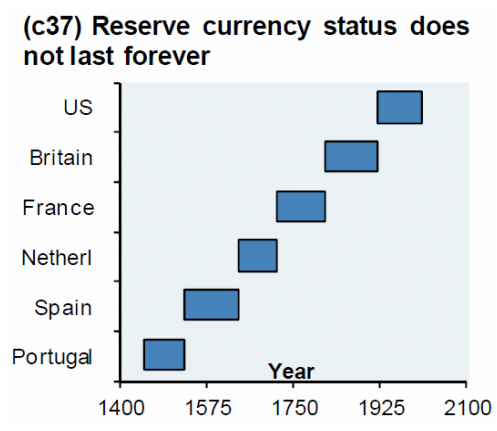 Since about the end of the First World War, we’ve enjoyed our reserve currency status. But our time is running out.

Our elected officials are either fully ignorant of this concept or they’re basically on board with making it happen.

And our central bankers (folks like Fed Chairman Ben Bernanke) are in total denial.

Well, it happened in Portugal, Spain, the Netherlands, France and Britain. It will happen here.

It is happening here!

And as it continues to happen (as countries stop using dollars as their trading hub) Americans will continue to see their standard of living decline.

It’s vitally important that you understand this concept, because it shapes and contours every other major market phenomena we witness on a daily basis.

Everything from the price you pay at the pump for a gallon of gasoline, to how much you pay in taxes, where you travel, and how you shop, eat and live – it’s all tied to the dollar’s role as world reserve currency.

And it’s all going to continue to change for the worse.

The question is: When will you act to protect yourself from this failing currency? Today? Tomorrow? Or after you see your net worth slip away into the waste bin of world reserve currency victims?