Apple (NASDAQ: AAPL) just went through an eight-day losing streak. That is the longest losing streak Apple stock has had since 1998.

Think about that. Apple managed to go through both the bear market in 2000 to 2002 and the one from 2007 to 2009 without seeing an eight-day losing streak. That is an incredible statistic. With that being said, from April 21 through May 2, Apple stock lost ground for eight straight trading days. That losing streak caused the stock to become oversold.

Looking at the daily chart we see that both the 10-day RSI and the daily stochastic readings are in oversold territory with the stochastic readings recently making a bullish crossover. The blue line in the RSI portion of the chart is there to mark the recent low reading below 15. The last time the 10-day RSI was below the 15 level was in late 2008. 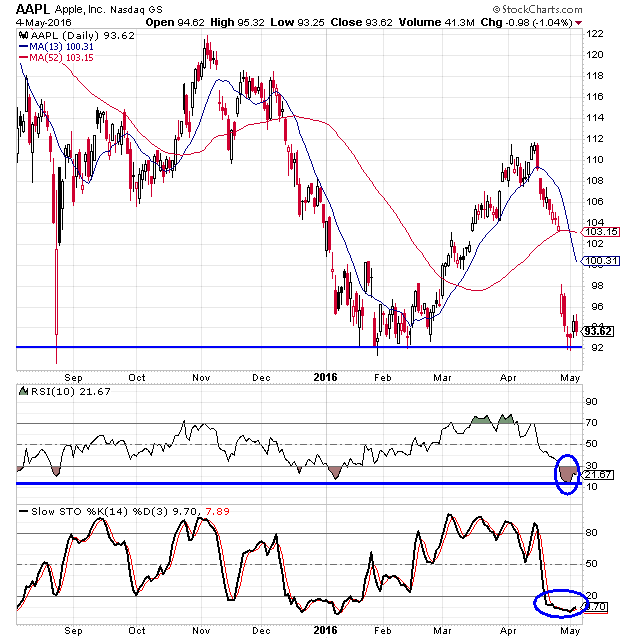 The support line just above the $92 level goes back over the last year and a half and we will see its relevance on the weekly chart. This area served as support in February and March before Apple stock bounced to the $111-$112 range in April.

Turning our attention to the weekly chart, I want to show you two different weekly charts on Apple stock. The first one is actually a chart I showed readers back in September. All of the elements on the chart are what I drew back then with the only thing changing being the price action since then. We see a resistance point up around the $117 area and we see the previously mentioned support level in the $92.50 area. The reason that area was pointed out was that it was acting as resistance in late 2012. Just for the record, the piece I wrote in September had a bearish slant. 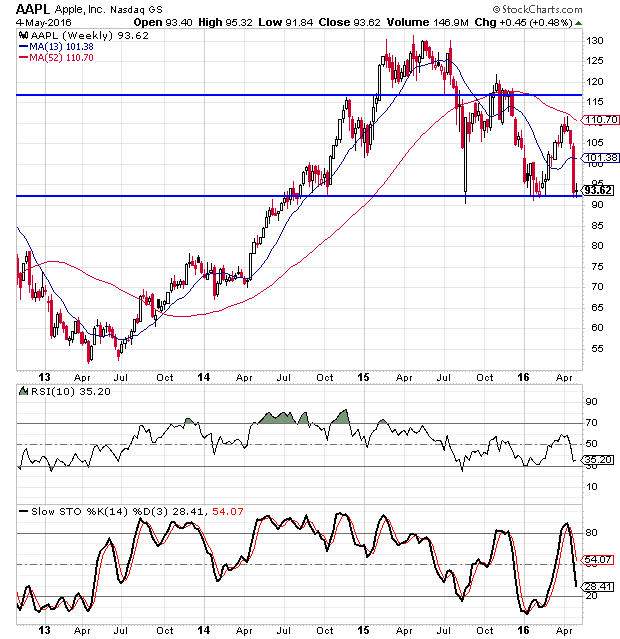 We see that the $92-$92.50 area did indeed act as support for Apple stock in January and February and then the stock rallied back up to the $111.50 range. The second weekly chart I have for you adds a new element to what is going on with the stock: that is a downward-sloped trendline that connects the highs from the past nine months. 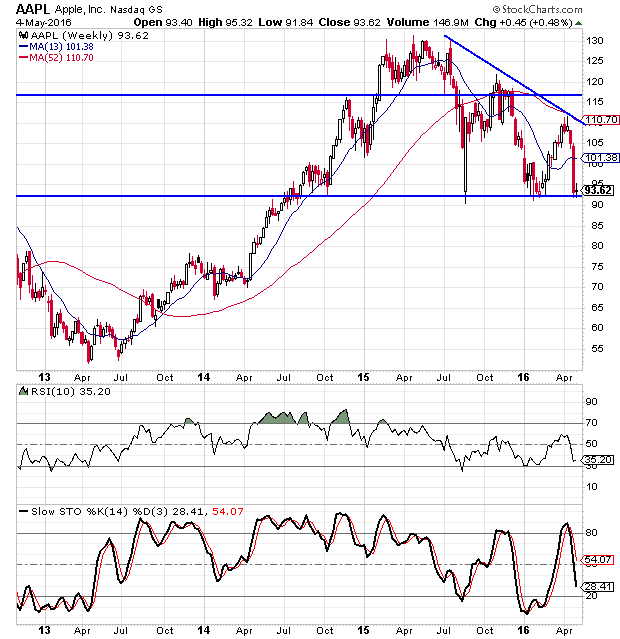 I see the stock rallying from the extremely oversold levels on the daily chart and using the $92 area acting as support once again. The company did miss on its earnings estimates and that spurred the gap lower on April 27, but I believe that decline played itself out and those who wanted to sell the stock have done so. Apple’s growth has slowed down, but the company is still doing quite well and it is sitting on a ton of cash that it can put to use in developing new products and driving new marketing campaigns.

It astonishes me that Apple’s price-earnings ratio is below 10 at this point and the forward P/E is barely above 10. I think Apple stock is a value at this point and would look to buy it below $95. I look for a move back up above $110 in the near future. If Apple stock can break above the trend line and then move above the $111.50 mark, it could very easily move back up to the $120 area. Should the stock drop below the $90 mark, I would look to get out.