But if you’re the average American, you’re actually in worse fiscal shape than the average Greek.

According to data from the Senate Budget Committee and the International Monetary Fund, the average American has a higher debt burden than the average Greek. 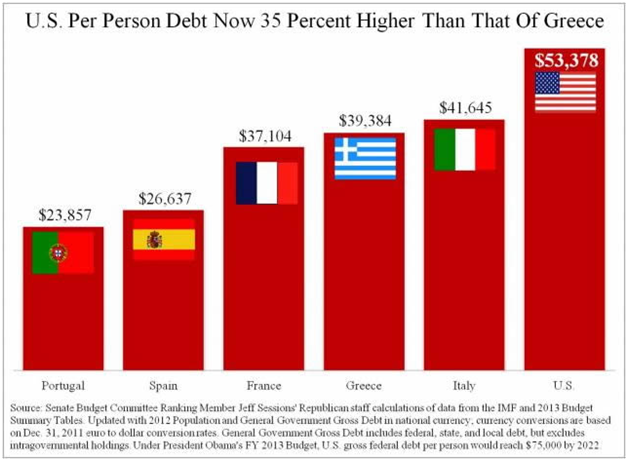 So why is Greece currently in disorder and mayhem, while the U.S. is basking in relative peace and calm?

The simple reason is that the U.S. can print its own currency, and Greece cannot.

That might seem like a pointless distinction. But it’s true. If our current budgets were constrained by our inability to print new dollars, we’d be having the same societal strife here in the United States.

The thing is, I expect we will eventually see this type of strife pop up here. It’s an inevitability.

And I believe that for some parts of the country, the fallout will be worse than it currently is in Greece. That’s because our debts are larger – and unlike this Greece issue, almost no one is preparing for a similar widespread currency crisis.

It’s perverse, but our actual ability to fund our own debt with newly minted currency units is actually making our situation worse and worse by the day. If we had some kind of real-world link between what our government spends and what it takes in, we’d be in better shape over the long run.

And eventually, I think we’ll get there – but only after a painful, Greek-like breakdown.

The math is simple: we’re the largest debtor nation in the history of the world. It’s an unsustainable trend. If it were possible to print our way into solvency, then Zimbabwe would be Switzerland.

But even the Japanese powerhouse economy has stalled for decades thanks to its money-printing schemes. If the Japanese can’t make it work, then I think it’s a fair assumption that it won’t work for us.

I don’t know what the trigger will be for the next serious leg of our currency crisis. It could be war. It could be the loss of our reserve currency status. Or it could be a series of small events, over a period of years, that slowly leads to a Greek-style meltdown.

And you have to realize that the technicality that separates us from Greece won’t last forever. Eventually, debts catch up to you. It’s true for rich people and poor people. It’s true for small nations – and it’s eventually true for large, powerful nations.

When the leviathan falls, I hope your savings aren’t underneath it.

It can’t happen here? How sure are you?