Is gold still good? For many investors, the answer is a resounding “No.”

To be sure, many speculators have lost money, especially latecomers to the gold game. The chart below summarizes the rout in one quick, harrowing glance.

Many “experts” have embraced the trend to enlighten us with dire predictions of $1,000 an ounce (or lower) gold prices. I suppose the dire new “experts” offset the exuberant old “experts,” who were predicting $5,000 an ounce when gold was steamrolling past $1,800 in late 2011.

But that doesn't answer the question: Is gold still good?

First, it's important to understand gold. Gold is not an investment; it's not a commodity. Gold is a store of value, and that's the way it should be viewed. From a portfolio perspective, dollars are allocated to gold to maintain long-term purchasing power.

Gold has been a store of value over years, decades and centuries.  So despite the short-term price decline, gold, in my opinion, is still good.

Much of this government debt has worked its way onto central-bank balance sheets. The central banks purchase this debt with newly issued money; thus we have record levels of money circulating through the economy.

The graph below, constructed by the St. Louis Federal Reserve Bank, shows the surge in currency and demand-deposit (known as M1) stock in recent years. 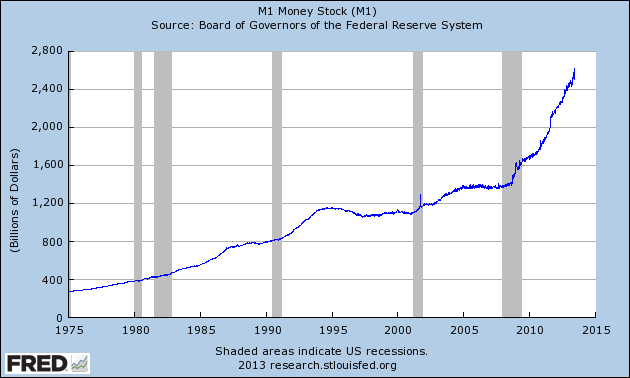 Each new dollar that enters the economy reduces the purchasing power of the dollars outstanding.

This is an easy concept to grasp.

If there are a billion dollars circulating through the economy one day and the central bank doubles the amount to two billion dollars the next day, what cost $1 one day will cost $2 the next, holding all other variables constant.

In the real world, of course, all variables aren't held constant, so the relationship between price increases and money supply is less direct.  Many other variables – such as demand, supply, productivity, money flow – also figure into price. 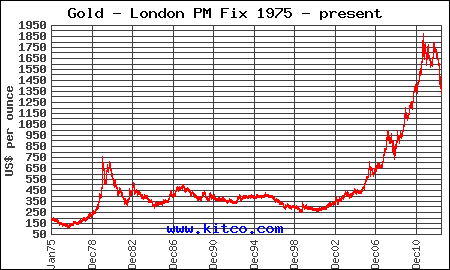 Admittedly, Western governments could begin to balance their budgets and return to sound money practices. In that case, gold would lose its utility as a store of value against the dollar, the euro and the yen.

But what are the odds of that occurring?

Spending garners votes. If you can spend with impunity, which every politician does, why stop? You don't, which is why deficit spending in the United States is expected to remain above $1 trillion indefinitely.

Concurrently, the Federal Reserve is unlikely to throttle back on QE3, at least this year, especially when you factor in real gross domestic product growth, which was unexpectedly revised down this week to 1.8% from 2.4% for the first quarter.

So, yes, gold is good. That is, it's a good long-term store of value, and will remain one for the future. That said, gold could still be a bad short-term trade.

So buy gold with an eye on the distant horizon, not the tip of your nose.