Over the past several weeks, the combination of rising stocks and falling bonds has led to an unusual and extreme precedent between the two asset classes.

While there isn’t necessarily any fixed correlation between the movements of stocks and bonds, they generally move within at least one standard deviation of each other.

Stick with me because this is EXTREMELY important.

So, if one standard deviation is considered “normal,” two is extreme and three is well, historic. And that’s exactly what we are witnessing today.

Just take a look at the chart below from esteemed analyst Jason Goepfert. 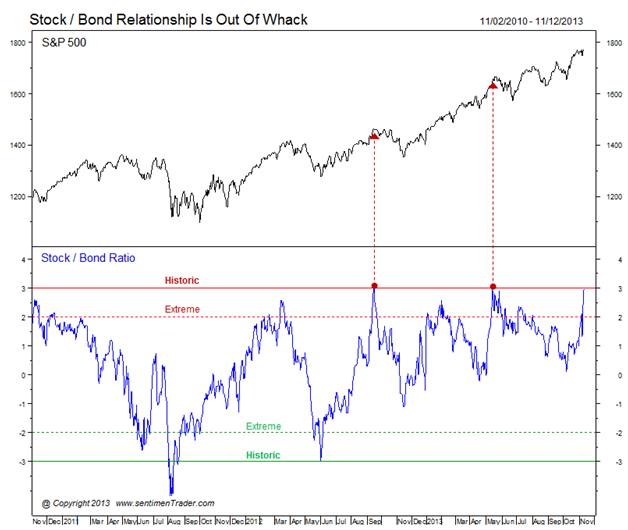 Earlier this week, the Stock/Bond ratio hit 2.96, one of the highest readings seen in the last 50 years. In fact, it’s only happened twice over the past six years. Both times that has led to intermediate-term declines.

So, knowing that we could be entering into a potential lull, how can we use a portion of our portfolio to protect and drive income over the next several months?

It’s a simple and straight-forward concept that I will be discussing in my upcoming webinar on Friday at 12 p.m.  ET. Click here to sign up.  (If you are not able to attend … don’t worry. I will send you the video shortly after the event to watch at your leisure.)

Credit spreads, more specifically bear call spreads, allow you to create your own income – a monthly paycheck, if you will – while protecting against potential market declines. How? When you sell a credit spread, you collect cash (credit) up front while simultaneously transferring risk to the buyer.

Best of all, you can create your own income targets when selling credit spreads. And the sum of all of your so-called targets – when set properly – gives you a targeted monthly income.

Let me explain using a recent investment in Apple (I will be discussing an Apple trade in the upcoming webinar along with a few other ways to protect your portfolio).

A bear call spread is a credit spread composed of a short (sold) call at a lower strike price and a long call at a higher strike price. The nature of call pricing tells us that the higher-strike purchased call will cost less than the money collected from the lower-strike sold call. That’s why this spread involves a cash inflow, or credit, to you.

The ideal outcome is for the underlying stock price to stay below the strike price of the sold call through option expiration. In this case, the spread expires worthless, allowing you to keep the premium collected upfront.

Getting back to Apple, I’m sure most of you remember when the stock surged above $700 back in mid-September 2012. Amid the excitement, analysts were calling for the shares to race to $1,000 by year-end. I, on the other hand, noticed the stock had pushed into a “very overbought” state. As a result, I thought the shares were well overdue for a pullback, at least temporarily. (The same exact situation is happening in Apple and the S&P 500 right now.)

So with Apple trading at $690, I chose a short strike for my bear call spread that met my risk/return objectives.

I also like to give myself a decent margin for error because it increases my probability of success. For this example, the 750 strike allowed for a $60, or 8.7%, cushion to the upside. In other words, Apple could have gained nearly 9% before October expiration and the spread still would have expired worthless, allowing me to keep all the credit.

Apple would have to move above $750.62 for the trade to start losing value. As long as the stock price stays below $750.62 through October option expiration, the trade would be successful.

Nine days later I closed the trade for almost the maximum gain. A 10%-12% profit in less than two weeks on a fairly conservative trade … not bad.

I’ve been doing this same type of income-based trade for almost two years now and have made over 20% in Apple while the stock is down roughly 20% during the same period.

Credit spreads are my favorite way to trade options, particularly selling verticals. It’s an extremely simple strategy to learn and arguably the most powerful strategy in the professional options traders’ tool belt. And I can use credit spreads as often as I like.

During this free 58-minute video course, you’ll discover a low-risk options strategy for generating monthly income — DOUBLE what you earn now — in up, down, and even flat markets. In fact, it can hand you 5% to 15% a month — all without you having to constantly watch your brokerage account. Every level of investor will learn something from watching this insightful presentation. Don’t miss out on this income stream. Click here to watch this course now.