Six of the country’s biggest banks have reported earnings over the past week, providing investors with an abundance of numbers and data. 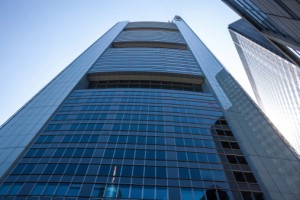 There are two main ways to consider all this information: by individual bank, or as a group.

On an individual basis, there appears at first glance to be clear winners and losers. Wells Fargo  (NYSE: WFC) was the only one in the group to report a rise in both revenues and net income through a challenging period marked by global economic uncertainty and persistently low interest rates.

Goldman Sachs (NYSE: GS), on the other hand, showed a sharp drop in both net income and revenue, reflecting a steep decline in bond trading that hit this institution particularly hard since it is less consumer-focused than many other deposit-taking big banks.

Between Wells Fargo on the high end and the disappointing results of Goldman Sachs, we also heard from JPMorgan Chase (NYSE: JPM), Bank of America (NYSE: BAC), Morgan Stanley (NYSE:MS) and Citigroup (NYSE:C), which all acknowledged some tough market conditions and reported varying degrees of success at riding the uncertainty.

Investors interested in the big bank sector have in these latest earnings reports a wealth of data with which to judge different companies. But if you consider how big bank stocks have performed over the past week and recent years, you’ll discover more that’s similar than different.

The Rising Tide for Big Banks

While each bank has had its own individual set of fortunes and challenges, it seems that the big bank sector is one where a rising tide tends to lift all boats, and rougher waters cast them all about. Yes, these banks are often in direct competition with one another, but they also tend to move together on the strength or weakness of the economy, interest rates and the regulatory climate.

I suspect that’s why Goldman Sachs stock fared fine after the weak earnings report, while Wells Fargo remained steady but failed to charge ahead. There seems to be a collective market read that all of these banks are operating in an environment that is not great, but not terrible either, all adding up to a cautiously optimistic outlook for all of them.

That does not mean that, as investments, all these big bank stocks are equal. But it does seem to suggest a confidence that they’re not going to be hit with devastating regulations and they will eventually see relief from low interest rates. Beyond that, it’s up to the individual banks to make or break their own fortunes.

As we saw from JPMorgan’s $6 billion trading loss in 2012, banks still have a lot of room to, in a nutshell, mess up. In fact, JPMorgan seems to still be suffering the fallout of that breathtaking loss. Revenues in the latest quarter fell short of forecasts while the company warned that fourth quarter earnings could also fall short of forecasts.

Nonetheless, JPMorgan stock ended the week about flat. Despite its headline-making losses three years ago, it has managed to pretty steadily grow its share price, which is up about 14% over the past two years, and has increased more than 65% over the past five years.

Rounding out the group of big banks that reported earnings last week was Citigroup, which showed slightly lower revenues but a big jump in profits due in large part to expense controls; and Bank of America, which also showed a slight drop in revenues but returned to profitability in the latest quarter amid strong growth in deposits and residential mortgages and home equity loan originations.

To be sure, the failure of so many banks to grow their revenues in the quarter despite growth in deposits and mortgage originations, underscores how the current environment is far from optimal.

Nonetheless, it appears that most banks are benefiting from discipline with expenses and diversification. For investors, these aren’t exactly growth stocks, but they are established businesses that, as a group, have done pretty well in challenging times.