It’s the biggest growth market in the U.S.

One technology could be REQUIRED by every cannabis grower and retailer. And early investors could make a fortune in the coming months.

Ackrell Capital says the industry could grow to $100 BILLION. That would make this new industry one-half the size of the entire alcohol market. 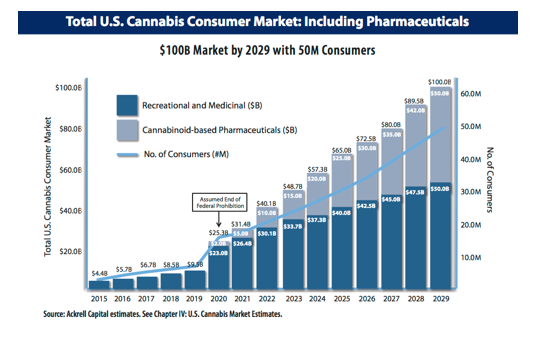 Cannabis is completely legal in California, Colorado, Nevada, Oregon and Washington. And the rapid rollout is also underway in Maine and Massachusetts.

The North America market for legal cannabis was $7 billion to $8 billion last year. 2018 will be a huge year of growth.

That’s because Canada could generate an additional $2.5 billion in sales. Plus, California could bring in $5 billion. This expansion could double the size of the market this year!

That’s a big growth market – with billions at stake.

In Canada, members of Parliament are concerned about security. And those same concerns are coming up in states like Colorado and California.

In Colorado, a bipartisan bill proposes a brand-new technology.

The bill is officially known as SB18-029. And it’s titled “Development of Marijuana Tracking Technology.”

It would require the tracking cannabis sold in the state. That means tracking every gram back to the original producer.

Colorado is interested in protecting revenues. Last year, the state reported that it’s collected $506 million in taxes since 2014.

Tracking of cannabis – from plant to retail – could assure that the state is paid tax on every sale. Tracking could also block “black market” product. Plus, it would make it easy to track illegal sales of cannabis to kids.

What exactly is this new technology?

This is the same technology that powers cryptocurrencies like Bitcoin and Ethereum.

This technology allows for the tracking of cannabis throughout the supply chain. And it would solve nearly every security concern.

IBM came back and specifically recommended this blockchain technology.

Its November 2017 report was titled, “BlockChain: An Irrefutable Chain of Custody Audit for the Seed to Sale of Cannabis in B.C.”

You don’t need to be a techie or an engineer to understand this.

The idea is actually pretty simple. There needs to be a technological solution in place to secure this $100 billion growth market. And that’s blockchain technology.

Tomorrow, I’m going to explain everything you need to know at my…

Just click here to confirm your spot. You’ll discover WHY blockchain could solve this major problem.