Brazil, under President Dilma Rousseff, has not been kind to investors. Brazilian stocks lost a third of their value in the second half of 2015 alone. That was largely due, no doubt, to the fact that the economy is suffering through its worst period since the Great Depression. 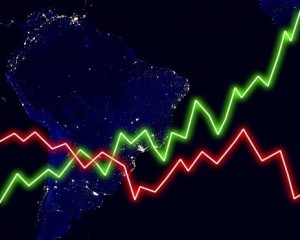 The downturn is being caused by several factors. One is Rousseff’s wrongheaded socialist policies. Another is a political scandal that started with Petrobras (NYSE: PBR), but whose tentacles have engulfed nearly all of Brazil it seems.

Lately though, Brazilian markets have been dancing the samba as a possible impeachment of Rousseff grows nearer.

In dollar terms, Brazilian stocks ripped ahead 25% in the first quarter of 2016, regaining more than half of that second half 2015 loss. The country’s currency, the real, is also up 10%. And Brazilian bonds have soared in price too.

But what happens now?

The key, no doubt, rests on whether Rousseff will actually be impeached and removed from office. That was the whole impetus behind the rally.

If Rousseff remains in power, the next election isn’t until October 2018.

Odds are about 50/50 that she will be forced out. The biggest political party in Rousseff’s ruling coalition – the PMDB – abandoned the government in late March.

This week will be crucial, as Brazil’s lower house of Congress votes whether to move forward with impeachment of the president. It is still a toss-up as to whether the anti-Rousseff forces have enough votes to carry the day.

Rousseff’s party – the Workers’ Party – is 100% behind her. They are calling any impeachment proceedings a “coup” attempt. That’s not surprising, since it was heavily involved in the alleged payoffs and corruption.

If the House approves the measure, the Senate has up to 180 days to consider the matter. Even if the Senate moves for impeachment, Rousseff’s hand-picked attorney general vows he will fight the impeachment all the way to the Brazilian Supreme Court.

In other words, this process may be more drawn-out than the markets want.

Even if Rousseff is finally removed, the politics are still not clear. Normally, the vice president – Michel Temer – would assume the presidency.

But guess what? There are questions as to whether he is also involved in the corruption.

There is also a possibility the leader of the House and head of the opposition to Rousseff, Eduardo Cunha, could become president for 90 days and then an election would be held. This would happen only if payoffs were found to part of the funding for Rousseff’s re-election campaign.

By the way, Cunha has also been implicated in the scandal that has engulfed all of Brazil’s elite it seems, with the exception of the judiciary.

My guess is that Brazil will end up with Temer, a moderate, as president.

Even if the political mess is somehow cleaned up, whoever takes over Brazil is being left a total economic disaster by Rousseff.

The International Monetary Fund is expected to lower its economic forecast for Brazil this week. And ratings agency Moody’s calls Brazil “an extreme case.” It cites the country’s very high debt-to-GDP ratio and the combination of high interest and weak revenues.

Moody’s is right: Brazil’s economy is not in good shape. It is shrinking at about 3.5% annually, with some forecasts projecting its economy to contract 4.5% this year. Adding to that dismal reality is the fact that interest rates are at 14.25% and the budget deficit is over 10% of gross domestic product.

Add it all up and it likely means conditions will likely get worse before they get better in Brazil. But I do expect things to begin looking better in 2017, if Rousseff is gone.

How to Play Brazil

How should investors play Brazil?

Do not rush in too quickly. I would slowly build positions over the next year or so.

As to specific investments, here a few suggestions.

Another solid stock is JBS SA (OTC: JBSAY), the world’s leading exporter of protein. It is a global leader in beef, pork, lamb and poultry processing. It owns several brands here in the United States too, including Pilgrim’s Pride and Swift Premium.

Finally, there is an ETF that should rebound along with the economy and the Brazilian consumer. It is the Global X Brazil Consumer ETF (NYSEArca: BRAQ).

Again, build these positions slowly. Brazil’s problems will not go away overnight.