Find out what’s cheap and buy it. That’s how you invest successfully…right?

And I write about oil quite a bit in the pages of this letter. For good reason: it’s the most common energy source used today.

But in case you don’t drive a car, eat food, buy clothing, heat or cool your house, or live in an area with asphalt paved roads, etc. etc., I’m here to tell you that oil is certainly not cheap – at least not on a dollar denominated basis compared to other energy commodities. Ironically oil is inexpensive on an inflation adjusted basis, as I wrote recently – but it’s one of the most expensive forms of energy you can buy today.

Technically, wind and solar are free – right? Sure. Only if you buy super-expensive solar panels or wind turbines.

The cheapest wind power turbine I can find that could possibly generate even a fraction of your home’s electricity costs over $3,500 – not including installation.

For a decent solar panel, you’ll probably spend close to $10,000 at least.

So let’s ignore these “alternate” energy sources for the purposes of this article.

As an energy consumer and an investor, I’m interested in paying the least amount possible.

And today, there’s little contest.  You might not like to hear it, but coal is still the cheapest energy source by far. 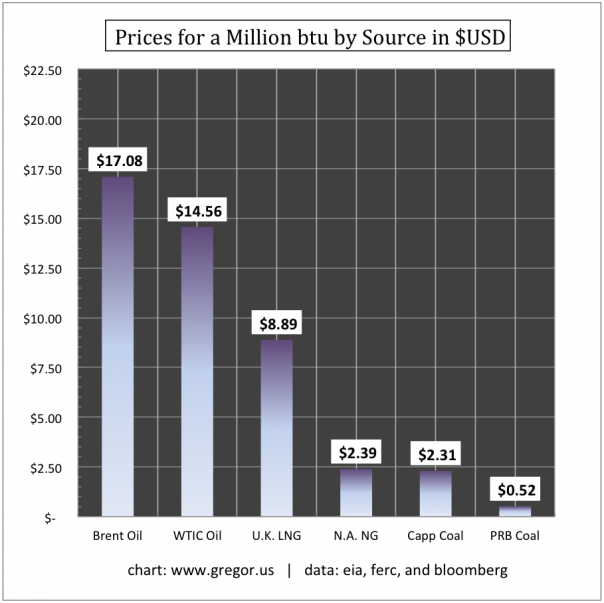 (Hat tip to Gregor Macdonald over at Gregor.us for his excellent chart.)

For some perspective, one million British Thermal Units (BTUs) is equivalent to burning seven gallons of gasoline, or 160 pounds of wood – or 80 pounds of coal.

Even if we look at the most expensive coal in the United States (Central Appalachian, or CAPP coal), it’s still cheaper than natural gas. Considering that the price of natural gas dropped by 50% over the past few years, that’s saying something.

From my perspective, it seems as though coal is the perfect candidate for further consideration as an investment asset class. It’s cheap. It’s in a growth trajectory. It’s pretty universally despised and forgotten.

That’s exactly the type of scenario you need to be on the hunt for if you want to be a successful commodity investor. In fact, it’s the only scenario you should be looking for. If you’re not a contrarian, you will probably lose money as a commodity investor – even during a huge bull market like the one we’re in the middle of right now.

So if you’re interested in investing in coal companies, you might be tempted to look into Arch Coal (NYSE: ACI) and Peabody Energy (NYSE: BTU).

Those are two of the largest American coal companies – but frankly, I don’t find them attractively valued right now. Both have simply staggering amounts of debt and though they appear inexpensive on an earnings basis, once you add in the debt they’re not so cheap.

Today, I find railroads to be a somewhat more appealing way to play the coal trend. Rail is the primary, and pretty much the only, way coal gets moved from mines to power plants. And railroad companies typically get paid by the ton – regardless of how much the underlying good or commodity costs.

And at the moment, Norfolk Southern Corp (NYSE: NSC) seems to be the most inexpensive publicly traded railroad. Norfolk transports coal throughout the Appalachian region. They currently pay a 2.7% dividend yield – and even when you add in their added debt, the company trades for just under 16 times earnings.

That’s not really “cheap” but it’s manageable – and it’s a really reliable way to play the trend, as it’s likely we’ll continue using coal to provide electricity to the world.