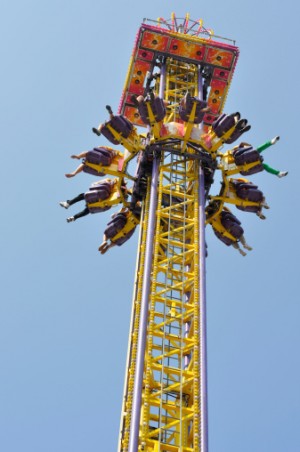 While most investors are big fans of roller coaster rides, the majority overlook amusement parks when it comes to investing.

But just because these companies offer thrills at their parks, doesn’t mean they can’t be thrilling for income-focused portfolios.

These stocks aren’t volatile, but what makes them thrilling is that they offer some of the highest dividend yields in the market. There’s one particular investment that looks to be the double whammy of investing, offering both income and growth. This stock is easily the top dividend stock to own today.

The amusement park industry will also benefit from a rebounding economy. Cedar Fair keeps individuals coming back to its parks by using technology to build taller and faster rides.

It has not only been capitalizing on a rise in park attendance, but also by getting amusement park goers to spend more inside the parks. A few of its most notable initiatives include revamped food offerings and the Fast Play option that allows riders to skip long lines.

Cedar Fair has managed to grow revenue at an annualized rate of just over 8% for the last decade. Its operating income has grown at an annualized 9.2% over that same period. A rise in attendance and guest spending should continue driving revenue growth, ultimately leading to higher distributions for investors.

Part of the reason that Cedar Fair has managed to grow revenue and income at impressive rates despite the economic downturn is its “economic moat.” The “economic moat” is Warren Buffett’s term for a competitive advantage. The amusement park industry enjoys a large economic moat thanks to their real estate holdings.

Finding a large enough piece of land, and being able to afford the permits and insurance, are big hurdles that prevent new competition from entering the market.

Cedar Fair operates as an MLP (master limited partnership), which means it must distribute all of its income that’s not needed for operations or maintenance capital expenditures. As a result, it also enjoys favorable tax treatment, which means its taxes are lower than corporations like Six Flags.

Cedar Fair is one of the best ways to gain exposure to the leisure and entertainment industry. Its ability to continue attracting individuals and families to its parks makes it a growth story, but its superior yield makes it the top  dividend stock to own in the leisure market.

Your other options in the leisure space all offer dividend yields that are less than half that of Cedar Fair stock. These include the likes of Carnival (cruise ship operator), Wynn Resorts (hotels and casinos) and Vail Resorts (ski resorts).

Cedar Fair stock offers a yield that is above Six Flag’s 4.5%, but that’s not the only reason.

Cedar Fair’s price-to-earnings ratio (based on next year’s earnings estimates) is 15.5. That’s well below Six Flags’ 27. Meanwhile, Cedar Fair has a higher profit margin and return on invested capital than Six Flags.

Over the last three years, the units of Cedar Fair have outpaced the return of Six Flags’ shares by over 50%. Cedar Fair stock has also outperformed the S&P 500 index by 300%.

Amusement parks are often overlooked as investment choices. Investors would much rather take their chances on high profile momentum stocks. However, Cedar Fair has the ability to reward its unit holders with steady capital appreciation and a 5.1% yield.