Proto Labs (NYSE: PRLB) could experience a 25% rise after reaching a new high.

The 3D printing industry has gotten its share of buzz from investors this year. Many believe 3D printing is a disruptive technology because consumers will be able to print items as opposed to buying them from a store.

Though there is some truth to that mentality – and there is certainly a ton of promise for 3D printing – I don’t expect 3D technology to be widely adopted for several years. Much like IBM’s (NYSE: IBM) first computer, 3D printers are too expensive for most people right now. And commercial prominence is unlikely to occur until price levels decline.

However, that’s great news for Proto Labs … because they don’t sell 3D printers. The company owns 3D printers and charges customers to use them instead.

This is a great business, too. Many small original equipment manufacturers (OEMs) will use Proto Labs technology during the design phase of projects. This eliminates up-front printer costs for OEMs.

Proto Labs is also willing to take small orders, which most manufacturers are not willing to do. So engineers can fix design flaws using only a few prototypes as opposed to ordering a large batch.

Given this incredible niche, it’s no wonder that PRLB is near a new high. The shares look ready to motor higher too, given the breakout from a recent consolidation phase.

PRLB had been stuck between $44 and $50 for much of this year. However, the shares rocketed higher from this zone in April. The 50-day moving average (orange line) acted as a springboard that also helped pushed the stock above $54. 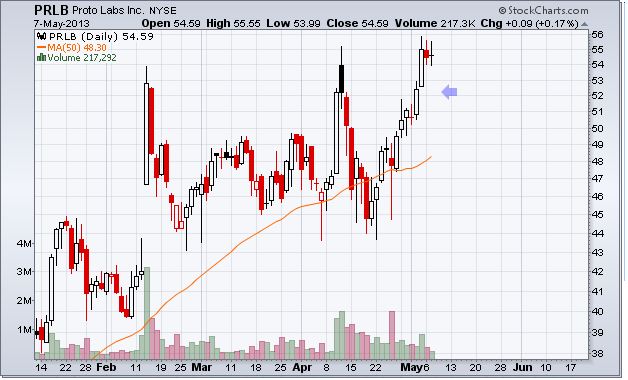 This chart shows the price of PRLB shares along with an important support line to monitor.

The breakout above $50 suggests Proto Labs is in a new bullish phase. Though the 50-day moving average should continue to provide support, I’d be looking for $52 to become a near-term support zone (blue arrow).

Short-term traders can enter now, putting a stop just under $52. Investors who hold stocks for the long term may want to wait until PRLB pulls back to the 50-day moving average, although I cannot guess as to what price that could be.

Don’t Miss: ChartWatch: IMAX is Set Up for a Huge Rise