It may surprise many investors to discover that gold miners are one of the worst performing groups this year.

In a previous ChartWatch article, I mentioned that Royal Gold (NASDAQ: RGLD) is my favorite gold miner because they don’t mine. That’s because it’s a royalty trust.

Instead of actively drilling for new gold, royalty trusts provide capital, land or both to smaller gold miners in exchange for a fixed share of future gold production. Royalty trusts give investors the benefits of gold miners without the headaches of operational volatility.

In the same article, I mentioned that RGLD shares were likely to be contained at the $83 level (blue line below) and dip to $74.50 in August. That pullback arrived, which is why I believe now is a great time to enter (or add to) a position in Royal Gold. 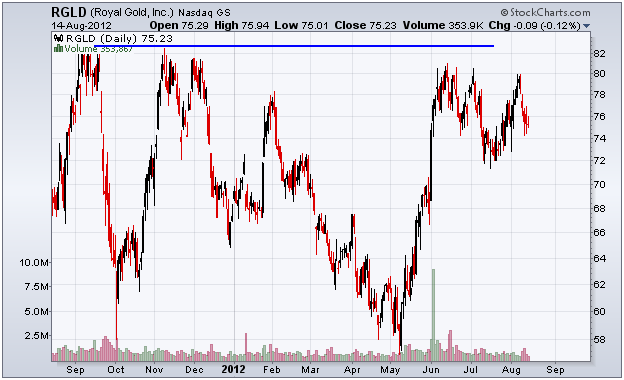 Though the shares dropped further than expected ($72), sellers appear weak. And despite a recent article published on the potential for a major decline in gold, no confirmation of that bearish trend has occurred.