PowerShares DB U.S. Dollar Index (NYSE: UUP) has surged during the past two months, and ChartWatch readers knew it was coming.

ChartWatch analyzed the dollar in a February report. Most investors were skittish on the dollar at the time. In fact, many believed the euro was ready to roar to new highs, sending the dollar toward fresh lows.

However, I noted that the euro looked toppy as opposed to super bullish. And my general bleak attitude for the EU’s economy led me to believe that the currency would pull back.

Moreover, Prime Minister Abe has been a devastating force to the yen. The Japanese currency is down 28% since October. And given Abe’s venomous stance on deflation, it looks poised to continue that decline as 2013 progresses.

With the dollar near a long-term support level (large box) and the two biggest alternative currencies ready to decline, a surge for the dollar was an easy call to make – and I did. 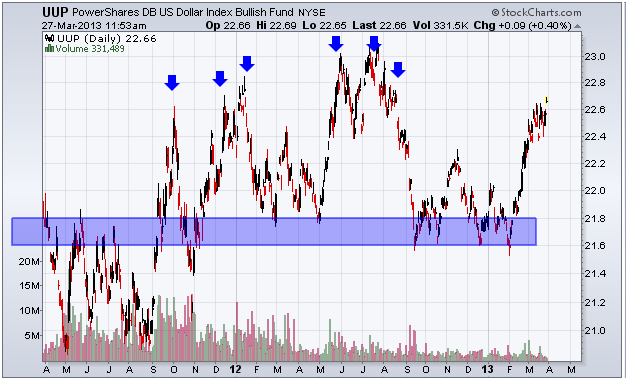 This chart shows the price of UUP shares along with an important resistance area to monitor.

The dollar has increased 4% since our last report. However, it may be about time to cash in those gains, as UUP is approaching a level where selling activity tends to pick up. Specifically, the $22.80 level (blue arrows) has been a tough price for UUP to remain above for any extended period. Given that UUP is within 1% of $22.80, and just 2% shy of its two-year high, any near-term upside appears limited.

Though I believe the dollar will continue to move higher this year and into next as the euro slowly decays, it needs to take a breather. Furthermore, the euro and the yen are very oversold, suggesting they will likely enjoy a relief rally. Obviously, if either or both rebound, the dollar will begin to trickle lower.