It’s been estimated that 97.5% of the earth's water supply contains too much salt for human consumption. That leaves just 2.5% that is fresh, drinkable water.

That amount is reduced further because glaciers and frozen lakes comprise two thirds of the world’s fresh water supply.

Though water isn’t scarce, it becomes a highly valued commodity when the weather heats up.

Unlike most assets, water’s value is virtually unaffected by the financial troubles in Europe. While the constant barrage of bad economic data and potential bailout solutions from Europe locked up the major indices, water stocks have hardly cooled down.

My favorite water company is Aqua America (NYSE: WTR), which operates regulated utilities that provide water and wastewater services. The shares have risen 15%, setting a new high in the process. More impressively, the stock looks poised to add to its gains.

Though the shares are overbought (blue arrow), that isn’t an unfamiliar condition. In fact, the last time it happened the stock rose for the next two months. 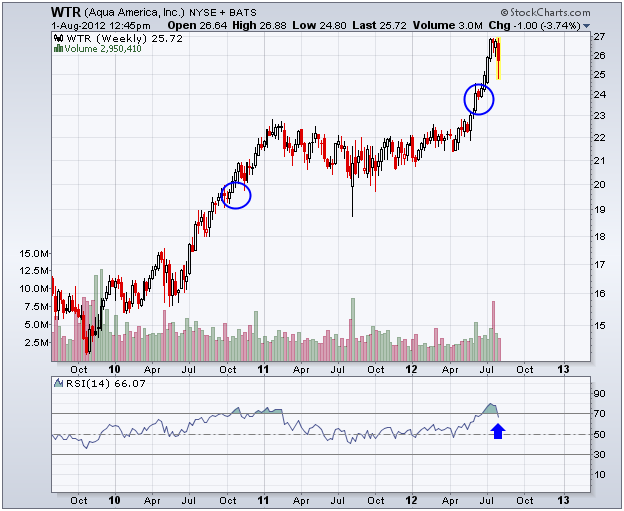 The same climb appears likely now, too. The bullish momentum for water and utility stocks shows no sign of slowing as the hot weather continues across the nation. These are also great defensive positions to hold while Europe struggles to overcome its fiscal challenges.

Investors shouldn’t be hesitant to enter new positions, despite a 15% gain since April. But should you want to wait, it appears that a support level is near the price the shares were when they first turned overbought (blue circle).

Also, waiting is not such a bad thing. WTR comes with a 2.5% annual yield.