Over the last year, the energy sector has been a tough place to operate, as oil and natural gas prices have remained low. The low prices for the commodities have led energy companies to report losses for most of the year. 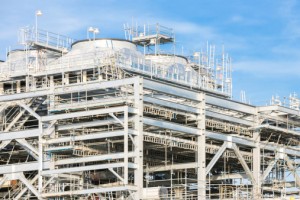 Cheniere Energy (NYSE: LNG) is no exception. It has reported losses in each of the first three quarters of 2015. However, I don’t think that continues in 2016.

Natural gas is approaching $2 per million British thermal units. Over the last 20 years, natural gas has dipped below $2 on only a few occasions, and each time it did, the price didn’t stay there very long. In fact, in 2012 the price dipped below $2 in April and then doubled over the next year. At the same time, Cheniere Energy stock went from $18.31 to $28.48 a share, for a 55% gain.

Looking at the charts, I found little things on the daily and weekly charts that were encouraging, but it was the monthly chart that got me the most excited about Cheniere. 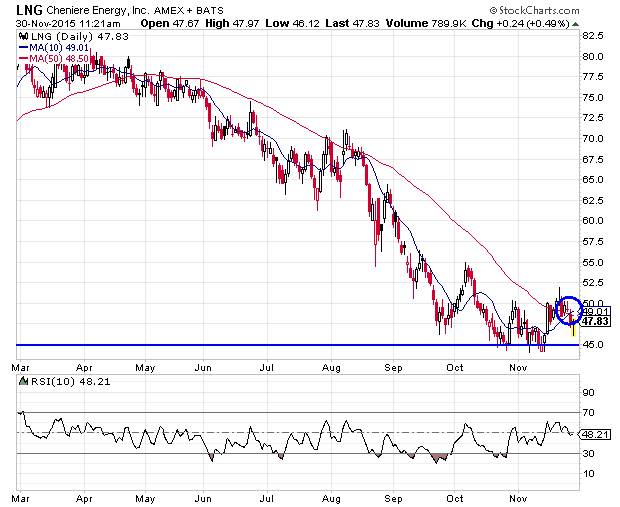 The weekly chart shows how the stock price has stabilized in recent weeks, but it also shows how oversold the stock was in late September. The 10-week RSI reached the 20 level, which is the first time since October 2008 that the stock has been so oversold. 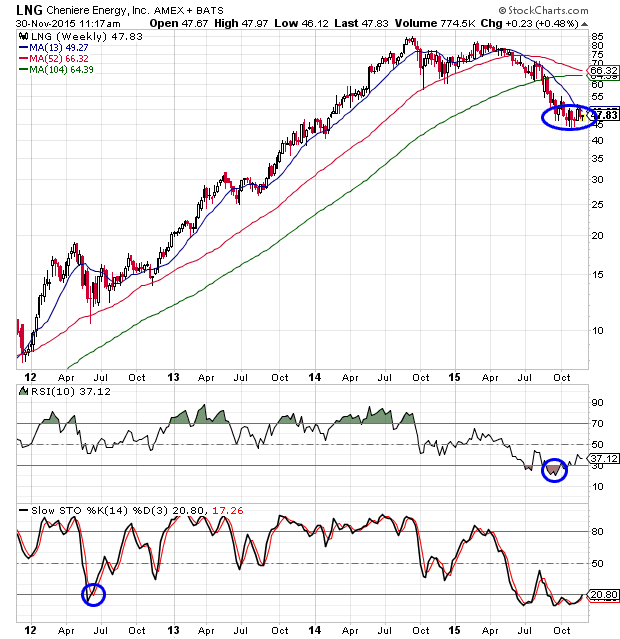 While the items of note on the daily and weekly charts are encouraging, it was when I looked at the monthly chart that I was convinced that the technical picture for Cheniere Energy is a good one. Look at where the stock is finding support right now: right at the $45 level. Look at where the stock found resistance from 2005 through 2007. So many times we see former resistance act as support on a pullback. 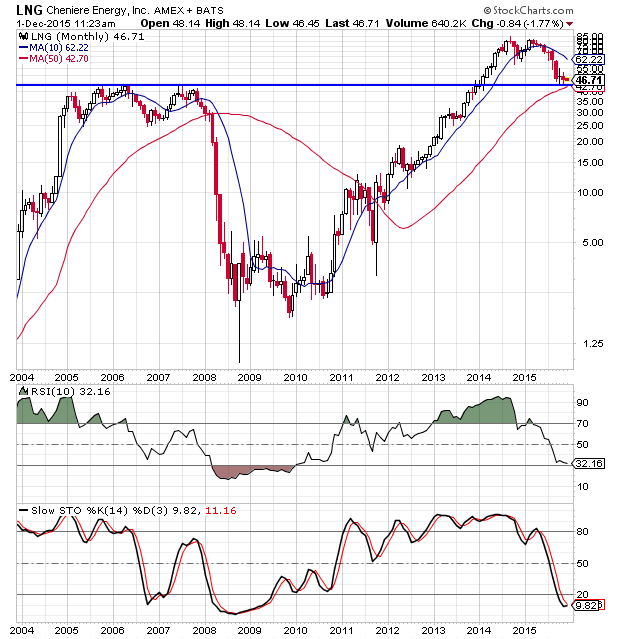 Overall we see a stock that seems to have found support on the daily, weekly and monthly charts and is the most oversold it has been in seven years. The sentiment toward the stock is bearish, which is a plus from a contrarian viewpoint, and you have fundamentals that are being temporarily hurt by low natural gas prices. When you add all these things up, you get a great long-term opportunity that could boost your portfolio tremendously over the next five to 10 years.

I would look to buy Cheniere Energy stock at the current price and hold it as a long-term investment. I would use a move below the $40 level as a stop-loss point.

Laughing all the way to the pump!

What’s the only thing better than paying low gas prices? Not paying anything at all! Amazingly, many Americans are getting away with it—and it’s all perfectly legal, thanks to Uncle Sam. In fact, one man received more than $6,165 to offset the cost of filling his sports car with premium. Sounds crazy, but this is happening all over the country. Find out why right here.