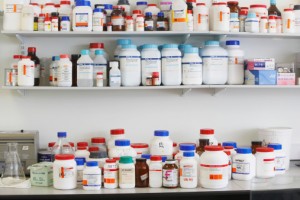 Drugstore giant CVS Health (NYSE: CVS) announced Monday that it plans to buy the entire pharmacy division of Target (NYSE: TGT) for $1.9 billion. Not only will CVS operate CVS-branded pharmacies in all of Target’s existing locations, all new Target stores will include a CVS pharmacy.

The move looks like a clear win for both companies.

For Target, the decision to exit the pharmacy business is part of a larger turnaround. CEO Brian Cornell announced back in January – just months into his tenure as CEO – that Target would discontinue all of its operations in Canada. The move meant closing 133 stores, laying off 17,000 employees and incurring a massive quarterly loss of $5.4 billion.

Today, a refocused Target is trying to put the massive data breach of 2013 and the failed entry into Canada behind it. With investments in e-commerce, leaner management and strategic relationships with designers, Target is trying to recapture the “cheap-chic” image that made it popular and is shedding other lines of business.

CVS is also going through a transformation.

No longer is CVS just about its chain of drugstores. Today’s CVS is a vertically integrated health-care-delivery machine. You can walk into a CVS with a cold or flu, see a nurse practitioner at one of CVS’ MinuteClinics, take your prescription to the pharmacy, and browse the store while you wait for it to be filled. Then CVS’ Caremark pharmacy benefits manager, or PBM, will process the billing to your insurance provider behind the scenes, keeping all available revenue in-house.

Target noted that its pharmacy business, which includes nearly 80 clinics, was “modestly negative” in terms of its financial performance. It looks as if Target will be able to exit a non-core and non-productive business while generating $1.9 billion in cash – $1.2 billion of which will go straight into stock repurchases. Meanwhile, CVS will add 1,660 pharmacies to its 7,800 existing stores.

And since CVS runs its own PBM, it can run Target’s pharmacy business much more profitably than Target can.

In addition to its 2006 purchases of Caremark and MinuteClinic, CVS recently announced plans to purchase Omnicare (NYSE: OCR) for $10.1 billion. Omnicare runs pharmacies for nursing homes and assisted-living communities, filled with customers that would likely never visit a CVS pharmacy and are more reliant on the kinds of prescriptions offered through CVS’ fast-growing specialty pharmacy division.

The Target deal is just the latest in a series of moves by CVS to become completely involved with the delivery of health care outside of a hospital.

If you consider that the move also helped Target become leaner and helped CVS gain $4 billion in additional annual revenue and pharmacy market share, it looks like a pretty sweet deal for both parties.

The one drawback for CVS investors is that the company trimmed its 2015 stock repurchase program from $6 billion to $5 billion. Still, these recent acquisitions have essentially made CVS a toll collector, generating small amounts of income every time a customer takes his medications. Considering the demographic trends fueling the health care industry as a whole, I think these investments will pay off handsomely for CVS.

As Target continues to focus on value, fashion and e-commerce, CVS is happy to pick up the pieces of its pharmacy business. The deal injects $1.9 billion into Target’s balance sheet, enabling it to buy back $1.2 billion of its own stock and invest the rest in growth.

Trimming the buyback is a small price to pay for the chance for CVS to pick up $4 billion in additional revenue in a move that also puts the CVS Health brand inside of every Target store.

That’s a win for both companies.