By all accounts, 2013 was a great year for stocks. Even with the S&P gaining over 26% on the year, the biotech sector stood out as a top performer. The iShares Biotech Index Fund (NASD: IBB) gained 60% on the year. The following chart shows the performance of IBB versus the S&P 500 during 2013. The blue line represents IBB and the red line represents the S&P.

While biotech outperformed the overall market and most sectors last year, the sector has been a laggard over the last six weeks. The chart below shows the performance of IBB versus the S&P since February 25. 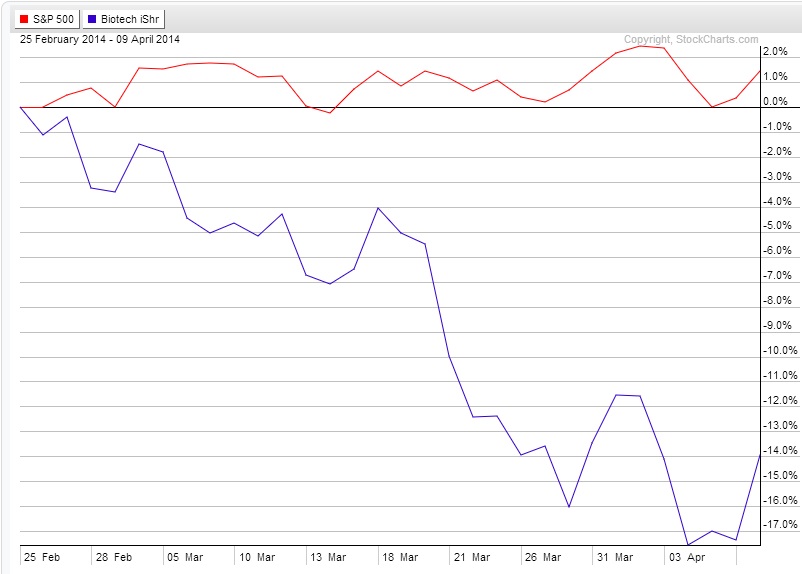 The S&P is only up 1.47% in the last six weeks and that is after a strong rally yesterday and a smaller one on Tuesday. As of the close on Monday, the S&P was down slightly for the year. While not what most investors were looking for, take a look at the IBB. It is down almost 14% over the last six weeks. The dip in the biotech sector has caused the Nasdaq to lag the Dow and S&P due to the number of biotech stocks in the index. But I don’t look for that trend to continue.

Looking at the weekly chart for IBB we see that the pullback over the last six weeks has brought the ETF down to the trendline that connects the lows from the past 17 months. It has also caused the IBB to hit oversold levels on the weekly charts for the first time in 17 months, at least based on the weekly stochastic readings.

Looking at the last two times IBB saw its slow stochastic readings dip below 20, the stock rallied sharply over the next year and a half. In August 2011, the fund hit oversold levels and then gained over 65% in the next 18 months. From the time IBB hit the oversold mark in November 2012 through the high in February, the fund gained 112%. And now here the fund is hitting oversold levels again and at a time when it is also hitting support from the upward sloped trendline.

While the IBB might not gain 112% over the next 18 months, I do think the sector will outperform the rest of the market over the next year and a half. I would look to buy the fund under $250 and I would use a close below the 52-week moving average as a stop price. The 52-week moving average is just over 10% below the current price and it is rising, so the reward to risk ratio is strong. I can see the IBB jumping 40-50% in the next year and a half with a 10% downside risk.

There’s one tax that’s inescapable… Real Estate Tax. If you own a home, you have to pay – no matter what. Except the thing is, one group of homeowners doesn’t. They haven’t paid taxes in years. They’re enrolled in a special program that allows them to completely pay off their real estate taxes through exclusive rebates. These rebates arrive in the form of U.S. government-backed checks. And they are available to any American, regardless of income or employment status… In fact, you can start collecting a Real Estate Tax Rebate check of up to $6,175 – Click here for all the details of this unique program.