How can you tell when the bulls are in full panic mode as their favored asset crashes?

Simple: when they start blaming other people for their losses. Think of “blame” as a stage of investment grief.

Last Tuesday, Douglas Hodge, Chief Operating Officer of bond giant PIMCO said that “the financial media is partly to blame for the huge movement out of bonds.”

His statement comes on the back of an acceleration in bond outflows over the past month that reached over $70 billion. That’s a big move – even for the trillion dollar world of bonds. In fact, it was a historic move – the biggest outflow since 1977…

But the COO said he believes net inflows to bonds will return over the long-term.

That might be so…no one has a magic crystal ball…but we also know that Mr. Douglas has an agenda…his company PIMCO benefits directly from a “return to bonds.”

But when he goes as far as blaming the media for the recent exodus from bonds his opinion is discredited immediately. Douglas should know that NO bull market lasts forever. And though the 30 year bull market in bonds seemed to be bulletproof – it’s showing definitive signs of ending.

Just look at the move in the highly-liquid iShares 20+ Bond Fund (TLT) below. Over the past three years we’ve seen bonds skyrocket to bubble proportions. But the long bond bull market seems to be crashing – after years of defying gravity. 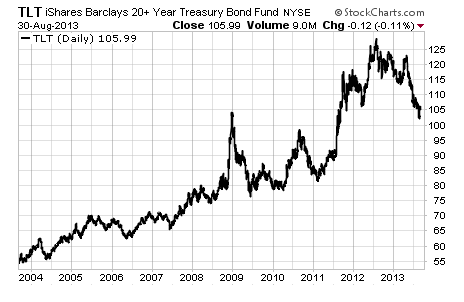 In fact, back in late 2011, I stated the following “The 10 year chart of the iShares 20+ Year Treasury Bond Fund (NYSE: TLT) above is evidence of how interest rates and the bull market in bonds has evolved since 2003. If you look towards the blue oval you will notice what should be the final stages of the decade long bull market in bonds. There is no doubt that the move in 2011 has been parabolic with Treasury bonds soaring over 40%. 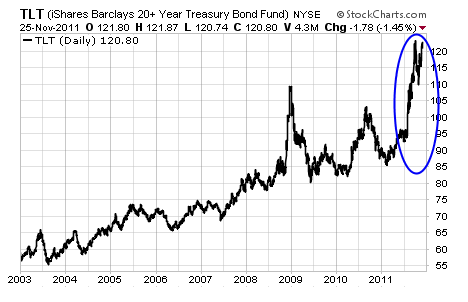 Fortunately for the bond bulls, given all of the world’s troubles, ‘the safety trade’ still looks intact. But, how much longer can rates stay at record lows? Realistically, the reward is now to the downside.”

And indeed it was. Now TLT is trading for roughly $106 and seems to be in full bear mode, selling off which each small rally.

The price action tells us one thing – but the panic from the likes of the Pimco COO gives us confirmation – the bond bull market is over.

The bond bubble has burst.

He recently stated, “bonds, the traditional income investment, are simply too dangerous. I say that because I’m convinced we are at the end of a 30-year bond bubble that’s about to burst. Interest rates are rising, and I expect them to continue to rise for years to come. That’s bad news for bonds and other fixed-income investments.”

So what’s the answer?

Ian just finished a special report titled The Bond Bubble Survival Guide for his High Yield Wealth subscribers. It’s a must read for every income investors. In this report, he lays out the interest-rate scenario that’s likely to unfold over the coming year. More important, he offers the best investments that enable you to build wealth and prosper as interest rates rise.

Best of all, this report is free to all High Yield Wealth subscribers. If you’re not a subscriber, click here to take a closer look at The Bond Bubble Survival Guide. Of course, you’ll also receive all the other valuable services High Yield Wealth offers.