I promised I would stay on top of the “silver manipulation” story – and there’s another wrinkle in this story to share. The Financial Times reported yesterday that the Commodity Futures Trading Commission (CFTC: the federal government’s regulatory body in charge of U.S. commodities trading) will drop its investigation into silver futures manipulation.

Before I get into it, you might recall that the specter of the precious metals conspiracy theory goes back far beyond this latest story, and further back even than the Hunt brothers’ infamous plot to corner the market on silver in the early 1980s – which really happened, by the way.

Unfortunately, unlike the Hunt brothers’ saga, most of these stories don’t need to be remotely true or even plausible in order for investors to fall for them.

The legend of lost or missing or stolen hoards seems to transcend time as well as our ability to think rationally. Maybe like fire and sweet food, the ideas of mislaid gold and silver are so intertwined with our cultures and DNA that we’ll never escape them.

In any event, it’s morally satisfying to blame someone else when you don’t get the immediate gratification you seek from your investments.

That’s why I think many otherwise rational people are so quick to blame big bad banks like JP Morgan (NYSE: JPM) when they didn’t immediately become super rich from their silver holdings.

Apparently it’s not enough that – in spite of weakness over the past year – silver has still nearly doubled in price over the past few years, and has nearly tripled in five years… 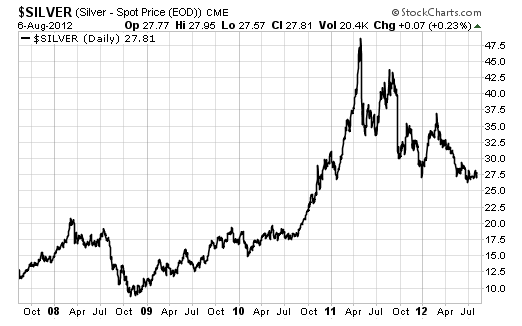 No, that’s not enough! Silver conspiracy theorists need to see silver trade higher every day in a straight line to the moon, or SOMEONE is to blame.

To blow away any remnants of this conspiracy theory, consider how much money a JP Morgan would have lost if they were shorting silver nearly anytime over the past 10 years in their effort to manipulate the price.

I’m not claiming that JP Morgan is not a big bad bank that should be suspected of all kinds of shady dealings.

What I’m saying is that if they shorted silver at pretty much any time except for April of 2011, they’ve likely lost lots of money.

And in the event that they shorted silver in April of 2011, I don’t call it manipulation – I call it a good trade. Silver was due for a pullback – it had essentially quadrupled in price in less than nine months.  If you expect silver to quadruple every nine months, then you’re setting yourself up for failure.

But I also bought silver a couple months ago when it was $30 an ounce.

I bought silver many times in between as well. And if you’re a serious silver investor, that’s exactly what you should be doing too: buying silver at regular intervals. Not trying to time your purchases, not anticipating huge gains overnight.

And not buying into ridiculous conspiracy theories when things don’t go your way immediately.

Buy silver because it can protect your wealth from inflation and currency devaluation – not because it’s manipulated.