Want to earn safe income but enough yield to make a difference? Try these four stocks with 4% dividend yields.

As the 10-Year Treasury note now yields less than 2%, many investors eagerly look elsewhere for income. Dividend stocks can fill that role. Here’s a group of four stocks that give investors twice the income the 10-Year bond can. 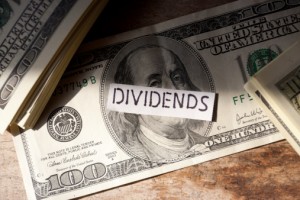 The quest for dividend yields has most investors trying to balance risk with reward. The 10-Year Treasury is, barring apocalyptic scenarios, a safe investment. Right now it doesn’t yield much, though. Some high-yield stocks or bonds reward investors, but they can carry a lot of risk.

Investors can find a happy medium with a relatively high degree of safety yet still receive a worthwhile reward with many solid, dividend paying stocks. Many of these yield in the range of 4%.

Here are four 4%-yielding stocks for investors to consider.

This stalwart Canadian bank, also known as Scotiabank, currently yields 4.1%. Like most large Canadian banks, Scotiabank never got involved in the mortgage meltdown that triggered the U.S. recession in 2008-2009.

With a market cap of $65 billion (all figures in U.S. dollars), Scotiabank is Canada’s third-largest bank. It features solid financials, with annual revenue of over $20 billion, and a strong, stable marketing position in both its domestic and international business.

This well-known telecom wireless provider is another solid dividend pick to add to your portfolio. It currently yields 4.8%, and with its extensive fiber optic network occupies an industry position as one of the two U.S. titans along with AT&T (NYSE: T). Verizon has a $192 billion market cap, pulls in $125 billion in annual revenue and just under $17 billion in earnings.

While the phone business can be a costly one with high capital expenditures, Verizon continues to spread its wings with its massive wireless footprint. Analyst estimates have projected revenue and earnings growth ahead for next year. Verizon also has been mentioned as a possible suitor for AOL (NYSE: AOL).

But potential future growth is merely icing on the cake for most Verizon dividend investors, who buy the stock for its attractive yield.

Utility giant Southern Company is concentrated throughout the Southeastern U.S. It produces electricity in its plants which run on coal, oil and gas, as well as nuclear. The company has a market cap of $45 billion and generates more than $18 billion in annual revenue with $2 billion in annual income.

Utilities pay out a large portion of their earnings in dividends, and Southern is no exception, with a payout ratio of 88%. Though some investors have had concerns about Southern’s exposure to nuclear as well as its build-out of new generating capacities, a potential $5.2 billion expense, analysts still project annual earnings growth of 3% to 4%.

Bullish investors have bid up Southern’s stock price so that it trades a bit high historically, now at 21 times earnings. But the stock still yields 4.2%. Southern Company remains a dominant player in its market and is an attractive dividend play.

New York-based Con Ed is another well-known, long-standing dividend stock – and one that is expected to announce another dividend increase early this year. The yield now, depending on the fluctuations in its stock price, is around 4%. And that’s after its share price appreciated more than 25% in the last year before the market pullback.

Con Ed is a slow grower, like most utilities, though over time it usually edges ahead with its revenue and earnings growth. Its annual revenue is just under $13 billion, with $1.2 billion in earnings.

The stock recently received some downgrades due to concerns about its prospects for near-term growth from pending rate increase requests. That’s always a factor in such a highly regulated industry. Even with conservative projections, however, analysts still see stability if not some growth. And the dividend is solid.

That’s the key for these four stocks. They’re solid. There’s a nice mix of a couple of utilities, a bank and a telecom. And all are long-established dividend payers that can give investors low-risk, steady income – worthwhile returns.