As you can see in the SPDR Dow Jones Industrial Average ETF (NYSEArca: DIA) chart below, the underlying ETF has pushed significantly higher over the past month. As a result, the RSI (2) and RSI (5) are in a “very overbought” state. 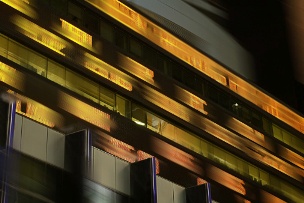 When a move like this occurs and we see our indicator push to “very overbought” levels, I immediately want to fade the sharp directional move.

When I fade a move – in this case a bullish move – I am hoping for a short-term reprieve in the underlying price. The price could move lower, trade sideways or simply plod slowly higher. I’m just hoping for the laws of mean reversion – the tendency for a stock to return to its average price – to kick in.

In this case, the Dow ETF has moved several standard deviations away from the mean. 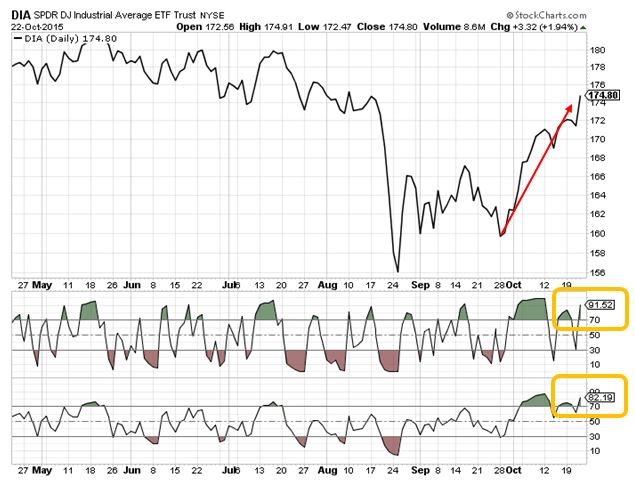 There was only a 3.76% chance that DIA would push to where it’s trading now.

So, we know the move is somewhat of an anomaly.

But remember, we increase our pot odds by wrapping a high-probability strategy around the anomaly. Rather than take a directional bias and simply buy puts, we want to sell calls – more specifically, bear call spreads.

In this case, since DIA is currently trading for $174.88, I want to sell a call at a higher strike. But which strike? Again, I always start my search with the strike that has an 80% probability of success.

As you can see from the options chain above, the 179 strike meets my requirements.

We can sell the 179 call strike and buy the 181 strike for a net credit of roughly $0.32. Notice that the spreads of the bid-ask prices in the options chain are wide. Normally, I would never bother looking at underlying ETFs with such a large spread. However, I am looking at the chain after hours and as you can see the bid-ask spread widens significantly.

DIA is a highly liquid ETF, and as a result, during market hours the spread is oftentimes a penny or two. If we take what is known as the “natural price,” which is price closest to the middle of the bid-ask price, the DIA November 179/181 is worth $0.32. If we move slightly below the natural, say $0.30, we should be able to sell the spread. This should be your approach with every spread trade you make, regardless of the width of the bid-ask prices.

But it’s important not to forget that we are adding a high-probability trade on top of an ETF that has already pushed into a “very overbought” reading. The use of the high-probability strategy increases the so-called pot odds of the trade that much further.

The other great aspect of vertical spreads is the ability to define your risk. We know at order entry the most we could lose is the width of our strikes (179/181, or $2) less the credit received ($0.30).

Having this information at order entry provides an investor the ability to further manage his risk through proper position size and other risk management techniques, such as adjustments or stop-loss orders.

For more information about how I use bear call spreads and other options strategies to profit during varying market conditions, click here.