You can buy some of the best oil businesses in the world right now
and earn more than a 3% yield on your investment.

And understanding three oil trends will help you build out an
oil-related stock portfolio to capitalize on the opportunity.

First, demand fundamentals are shifting as mature economies like
the U.S. strive to be more efficient and add more alternative fuels, such
as natural gas and biofuels, to their energy mix.

The developed world is growing slowly, if at all, so we aren’t
using more crude every year like a rapidly expanding economy would. That
said, OECD nations like the U.S. still use far more oil per capita then
counterparts in non-OECD nations. 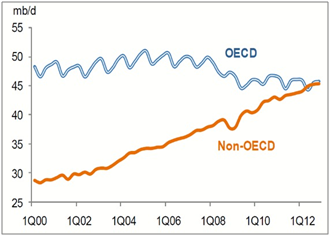 So expect OECD crude oil consumption to be flat to moderately down
on an annual basis for the foreseeable future. This doesn’t hurt our oil
investment thesis – remember that at the end of the day oil is a
non-renewable resource and decreasing consumption can be a good
thing.

It means we don’t have to find an alternative energy source
tomorrow (which would be very disruptive) and that we’re becoming more
efficient consumers (which will help our limited supplies last
longer).

However, non-OECD nations (like India and China) are growing and
thus require more oil every year. This International Energy Agency (IEA)
chart shows this relationship pretty well since 2000, concluding that our
respective oil consumption is about even, for now…

Second, supply trends have changed markedly over the last decade.
The most notable shift is that U.S. domestic oil output is the highest
it’s been in eight years.

In 2011, the U.S. was a net oil-product exporter for the first time
since 1949, according to the U.S. Energy Department.

According to the U.S. Energy Information Agency (EIA), several
other non-OPEC nations are also expected to contribute meaningful
long-term supplies of oil to global markets over the coming decades,
including Canada, Brazil, Russia and Kazakhstan. Buying companies with
exposure to these regions is a great idea.

And third, oil discoveries and subsequent production are being
aided by new exploration and production technologies (such as horizontal
drilling) and, with oil between $80 and $100 a barrel, now economically
viable sources such as oil sands.