After a bruising, multi-year collapse in the commodities market, many oil and gas companies are on the brink of financial ruin. 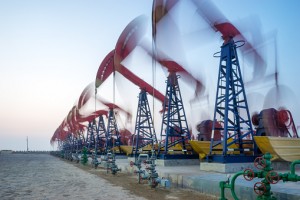 With profits crashing across the energy sector due to the steep declines in oil and gas prices, many companies face significant risk of bankruptcy. In fact, reports in the financial media recently speculated that natural gas producers Linn Energy (NASDAQ: LINE) and Chesapeake Energy (NYSE: CHK) hired bankruptcy lawyers.

Both companies disputed those reports, but the implication is clear. Bankruptcy risk is very much on the table in the oil and natural gas industry.

Exploration and production companies are reliant on supportive commodity prices to make their business operations viable. These are companies like Linn and Chesapeake, which explore and drill for oil and natural gas. E&P firms, or upstream as they are called, are hit the hardest when commodity prices decline.

Making matters worse is that several oil and gas companies loaded up on debt in the past several years, back when oil and gas prices were rising. When oil was at $100 per barrel, the credit spigot was wide open to energy firms, many of which couldn’t help themselves and levered up their balance sheets to purchase acreage and engage in corporate M&A.

For example, Linn purchased Berry Petroleum in 2013 for nearly $5 billion including debt. The end result is that Linn took on a lot of debt, just when oil and gas prices were at their peak levels. That decision clearly backfired: According to Linn’s most recent 10-Q filing, the company has more than $10 billion in long-term debt on its balance sheet, compared with just $344 million in cash.

Chesapeake is also highly indebted. At the end of last quarter, it owed more than $10 billion in long-term debt. With natural gas prices near multi-year lows, it continues to lose enormous sums of money. Chesapeake lost $12.5 billion over just the first three quarters of 2015.

In the upstream space, there are other oil and natural gas companies whose situations mimic those of Chesapeake and Linn. One is Breitburn Energy (NASDAQ: BBEP), an oil and gas exploration and production master limited partnership. Breitburn recently suspended the distribution on its common equity, but that may not be enough.

Breitburn Energy acquired QR Energy in November 2014 in a $3 billion transaction. At the time, the merger made Breitburn the largest oil-weighted MLP in the United States. But it also saddled the company with a bloated balance sheet. Breitburn has $3.5 billion in total debt, with just $12 million in cash.

Another company at risk is Vanguard Natural Resources (NASDAQ: VNR). Vanguard acquired LRR Energy and Eagle Rock Energy Partners in October of last year. It now has $2.2 billion in total debt and just $19 million in cash.

At the current oil and gas prices, both companies are losing money. With such significant debt obligations, something has to give. Oil companies have skated by thus far on asset sales, cost cuts and hedges. But there’s only so much cost-cutting and divesting that can be accomplished, and hedges will begin to roll off later this year.

As a result, investors should be aware that a slew of energy bankruptcies could be imminent.

This could also explain why there hasn’t been a huge wave of M&A activity in the oil and gas space yet. Bigger companies with deep pockets may simply be waiting for the bankruptcy wave to come to pass, at which point they will scoop up assets at bargain-bin prices.

As a result, investors need to tread very carefully when it comes to upstream exploration and production companies.