-David Sklansky, The Theory of Poker 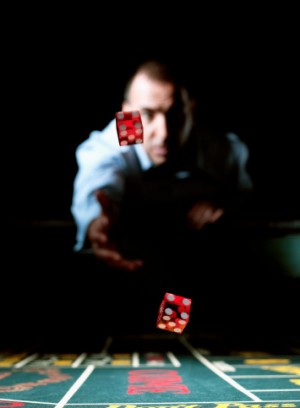 Back in my early 30s when I was privileged to live in sunny Flagstaff, AZ, I would take the reasonably short drive to Las Vegas so that I could make one the best bets in the gaming world.

How can the casino make this bet available when they don’t make any money on it? Simple: Most players aren’t smart enough to make this bet.

Just like I do when I place a trade, I set a limit of $100 to gamble with on this occasion, thereby defining my risk. Of course, just like trading efficient options markets I wanted to get as much mileage out of my $100 as possible, so I headed to downtown Vegas where the odds and minimum bets were the best. I just wanted to have fun, but at the same time I wanted to maximize my time on the table, ultimately knowing that eventually the casino’s small edge would catch up with me. It always does when the odds are stacked against you.

Amazingly, I found a $1 table with 100x times odds within minutes of arriving downtown. And I quickly discovered a half-drunken gentleman who let it be known that it was his payday. He had managed to triple his paycheck over the past hour.

All I could say was “awesome” and wished him continued success in his winning ways. But I soon noticed that his destiny was bleak. He was taking low-probability bets at every turn. I, on the other hand, methodically played the pass line and maximized the odds behind each wager.

I allowed probability to make my decisions. But my strategy, at least for the time being, was failing me. And to my left the half-drunken gentleman, who continued to move toward a complete state of drunkenness, continued to defy the odds by making low-probability bets … and winning.

His loud drunken state had caught the attention of passersby. Several made comments such as “wow, this guy is amazing” or “this guy is good.”

Of course, no one paid attention to my methodical and boring high-probability strategy, probably because I wasn’t loud and boisterous. Why would they? I wasn’t winning.

And now it became even more interesting. The gentleman started to increase his bets.  The end was near. I can’t tell you how many times I’ve seen traders, particularly options traders, become overconfident after a winning streak and decide to arbitrarily increase their position size. This is often a recipe for catastrophic failure.

Predictably, the gentleman eventually gave up all of his winnings and his paycheck. Sadly, his ignorance regarding probabilities had caught up with him. I, on the other hand, was back above break-even. I was down to a little more than $30 at one point, before the probability gods began to finally work in my favor.

So what’s the lesson here?

But as we all know, randomness is ever present in investing as it is in gambling.  And although we are drawn to judge our investment decisions and those of others on outcomes, it is often dangerous to do so without some perspective on how they got there. This type of behavioral trait leads to a herd mentality and failure as a long-term investor. Randomness can indeed teach us the wrong lessons.

But with a sound process or strategy, we know what to expect. Yet, most self-directed investors don’t take the time to learn strategies with statistical advantages. They prefer buy the stock, ETF or mutual fund that has recently performed the best. They have no systematic rules or process, just a hunch based on randomness.

The drunken gentleman had no process and no discipline, and we saw his fate. The market is no different.

This is why I love to trade options. I almost always want to act as the casino. I want to sell investors options with a low-probability of success. Typically, I sell options with approximately a 15% chance of success. This gives me an 85% chance of winning on each and every trade. I challenge self-directed investors to find a better strategy when investing in stocks, ETFs, or mutual funds.

I welcome you to join me in this journey with the Options Advantage service where I teach self-directed investors how to use probabilities to their advantage. It’s free for 30 days, so what do you really have to lose?  Those are the best odds you’ll ever see.