Since the beginning of the year, the Federal Reserve has held court in financial markets. When and how much will it raise interest rates? If the question has been raised once, it’s been raised thousands of times over the past five months. 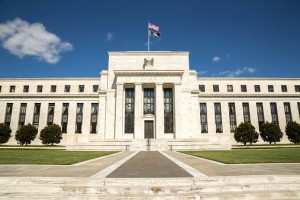 Most everyone accepts a Fed rate hike as a given. The Fed will raise interest rates this year. Now it’s just a matter of setting a target rate.

Conspicuously absent in the burble is any acknowledgment that the Fed lacks omnipotence. The Fed can influence, but it can’t dictate, interest rates. What’s more, the interest rate everyone points to – the federal funds rate – might be completely beyond the Fed’s control.

In bygone days – pre-2009 –  the Fed would set a target range for the fed funds rate and the banks would follow the range. They had no choice. A bank must hold reserves with the Fed if it wants to lend.

Historically, banks held very little reserves, and for good reason. Reserves were sterile and earned no income. Banks rationally wanted to keep reserves to the bare minimum. Better to run short-term deficits and have to borrow at the fed funds rate than to maintain excess reserves.

Today, it’s different. Bank excess reserves approach $2.6 trillion due to the Fed’s asset purchase program – quantitative easing –  that ran through October 2014. What’s more, the Fed now pays interest on these reserves, at 25 basis points. By paying interest, the Fed theoretically puts a floor on the federal funds rate. No bank would lend for less than 25 basis points when it can earn 25 basis points the Fed pays on reserves.

Why, then, is the federal funds rate 13 basis points?

Government-sponsored entities (GSEs) serve as an escape valve. Because one government agency is prohibited to pay interest to another government agency, the Fed cannot pay interest to government agencies that hold reserves at the Fed. This includes GSEs Fannie Mae, Ginnie Mae, Freddie Mac and the Federal Home Loan Banks. The opportunity costs to lend in the federal funds markets isn’t 25 basis points for the GSEs, as it is for the commercial banks – it’s zero. These institutions can lend below the interest rate the Fed pays on excess reserves.

The GSEs supply loans; not that there is much demand. With excess reserves running so high, most commercial banks are able to meet their reserve requirements. This is why the federal funds rate is 13 basis points, not 25.

For the Fed to raise the federal funds rate, it needs to shore up the floor. Legislation could be passed that provides an exception for the GSEs. The Fed could start to pay interest on GSE reserves held at the Federal Reserve, to prevent GSEs from undercutting the Fed.

Unfortunately, the Fed would need to sell debt in excess of $2.6 trillion because of the precipitous drop in value and rise in yield demanded for these securities. Worse yet, potential losses would likely wipe out the Fed’s $58 billion capital base.

Therefore, it’s little wonder that the Fed has drug its feet on raising interest rates. It can’t.