Is it time for ladies around the country to rejoice and investors to grab Valeant Pharmaceuticals International (NYSE: VRX) stock now that the so-called “female Viagra” has been approved by the Food and Drug Administration? 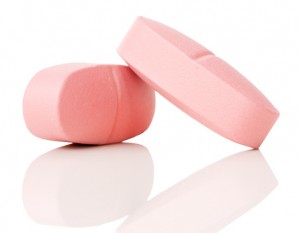 The FDA had previously rejected the treatment twice, saying it did not provide enough benefits to outweigh the side effects. Then entered the advocacy groups that argued women were being unfairly denied therapy options. If men get their blue pill for a boost, women should have their pink pill, too.

While it is not an overly impressive drug, the only other alternative for women with low sexual desire has been counseling and psychotherapy.

A Boost for Profits?

If Addyi has the same popularity as Viagra, this deal could be a steal for Valeant.

Valeant CEO Mike Pearson stated that the drug could earn hundreds of million in revenue for the company, but he hopes it could even be in the billions. This is ambitious, to say the least. In comparison, Pfizer (NYSE: PFE) averages just under $2 billion annual sales for Viagra.

However, Addyi doesn’t need to reach nearly those sales for it to be a success for Valeant. The general rule of thumb in biotech is that a company should sell for five times revenue. So this could be a great deal for Valeant if it is able to reach the few hundred million dollars revenue estimate over the next few years. That is a big “if” though.

There are a few big drawbacks to the drug that could prevent the company from hitting this revenue estimate.

First, it actually isn’t that effective. The drug helped only 1 out of 10 women in the clinical trials. Even for those women, their number of sexually satisfying events only increased on average 0.5 times per month.

The price has not been announced, but company officials said insurers will require a monthly copayment of about $30-$75, comparable to Viagra. So, for a minimum of $30 a month you have a 10% chance of having one more sexually satisfying experience each month.

The drug may be popular to try once, but continued use seems unlikely. I think ladies will quickly realize buying a couple glasses of red wine for the natural aphrodisiacs is a better option.

Which brings us to the second big problem with Addyi: the significant side effects. The FDA warns that the drug can cause severe low blood pressure and fainting. Patients must also avoid alcohol and certain medicines like birth control. Those sound like two things you may not want to avoid when you are giving your libido a boost.

Whether or not this libido-boosting pill is effective, there is one winner. Investor Bill Ackman has once again benefited from his relationship with Valeant. The hedge fund manager made a personal investment in Sprout when it was valued at about $500 million.

Ackman and other investors from Sprout’s most recent fundraising round will receive a cash payout of roughly twice their investment. According to The Wall Street Journal, Ackman was not involved in the deal, other than providing a “glowing reference” for the Valeant team.

So while Ackman benefits, that might be it. It looks doubtful that Addyi will be a pharmaceutical blockbuster hit like Viagra.

They’re owned by some of the wealthiest people on the planet. They share a few key similarities that distinguish them from 99% of equities. Even as the S&P keeps breaking record highs, they’re still crushing it. In fact, over the last ten years they’ve outpaced it by a colossal 390%. Find out more right here.