I’ll keep today’s article brief but informative, because there’s lots of confusing information out there about the Spanish debt crisis – and some plain old inaccuracies in the mainstream media.

First off, Spain is not, I repeat, NOT undergoing austerity.

This year, Spain’s total budget deficit will rise to approximately 80% of its gross domestic product. So why does the mainstream media decry the poor Spaniards for undergoing harsh and cruel austerity measures?

Because the mainstream media is filled with the kinds of socialist apologists who want governments around the world to have more power – or, more likely, they just don’t do their research.

Spain actually has less debt on a GDP basis than many other European countries – as well as the United States! 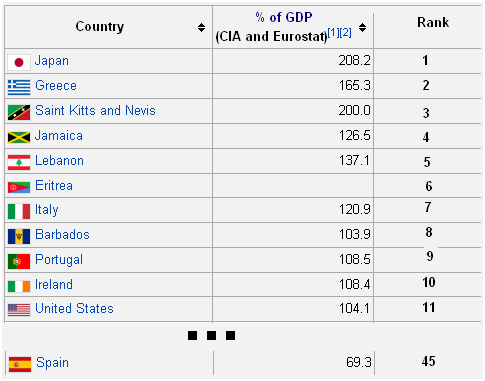 In fact, out of the ~200 or so countries in the world, Spain is only the 45th most indebted as a share of its GDP.

That’s not great…but there are plenty of much more indebted countries out there.

Which begs the question: Why is Spain now in danger of being unable to afford its debt if it’s not even in the top 10% of indebted nations, let alone the top 10?

Spain has reached a point where it can BARELY afford to pay interest on its debt. That’s why it’s in trouble now. And it’s not strictly because of the size of its debt – it has more to do with its borrowing costs. Nearly all of the nations in my previous list are watching Spain now – because if any one of their borrowing costs rise as much as Spain’s have, then they’ll be in the same predicament.

Imagine if the interest on your mortgage doubled in 18 months. That’s what Spain is looking at now. The payments on JUST the interest portion of their debt is approaching 5% of their GDP.

And the effect of their debt and “faux austerity” in the form of higher taxes and tighter regulation is an economy that’s starting to look like a hollowed out melon.
That’s because…

Spain’s stock market is ALREADY well below previous lows experienced during the global recession of 2008-2009. 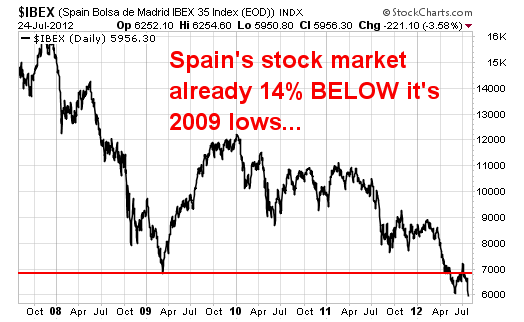 Could we see a similar reversion in the American stock markets if/when our borrowing costs soar and our government loses its collective mind? Yes, of course!

The answer to the Spanish debt crisis?

Despite Spain’s debt problems, and despite the fact that the Eurozone already pledged over $120 billion in bailout funds (more debt!) to Spain just over a month ago…

Spain is calling for more bailouts!

More bailouts are always the answer for these people. That’s because bailouts achieve a couple of things that power hungry socialist/Keynesians always want:

For one, they increase the stakes. It’s the old investment fallacy of throwing good money after bad, but since there’s no practical limit on how much money central bankers can create, they believe there’s no reason not to throw more money at the problem. Increased stakes inevitably leads them to seize more power.

We’ll see Spain be the thrall of European finance ministers up until the point when the whole system breaks.

And that’s the big blind spot for Keynesians and statists and socialists alike: They always forget that currencies fail all the time, and that political systems fail nearly as often.

Hang your hat on the good news that this madness will eventually end, but not until it gets much worse, unfortunately.