Yesterday I wrote an article talking about the giant bubble in U.S. Treasury bonds. My father quickly wrote in and asked me to explain why Treasuries are in a bubble – and what will happen when the bubble bursts.

First off, you should know (if you don’t know already) that the Treasury market is one of the world’s largest financial markets. It’s a $16 trillion market (and growing).

For perspective, $16 trillion is larger than the entire Gross Domestic Product of the United States.

I say that Treasuries are in a bubble because the size of the Treasury market is nearing a breaking point.

The U.S. Treasury is getting close the point where it will soon have difficulty funding its own interest payments.

You can imagine that even a small interest payment on $16 trillion would amount to a significant number. And you’d be right.

Take a look at the annual interest payments the Treasury has made for the past 23 fiscal years: 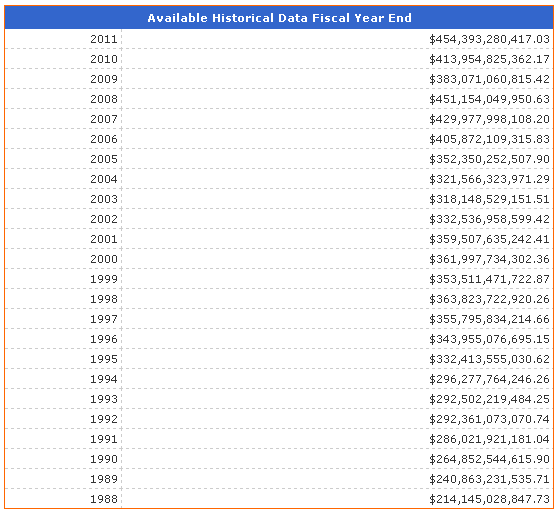 Notice that they’re growing – up more than double since 1988.

And they’re slated to grow even more in the coming years. Remember – I’m only talking about the INTEREST on our debt. That’s the bare minimum we have to pay. And what happens when the federal government can’t afford to pay back the principle?

Simple: they just roll over the debt into new Treasury securities – creating more debt in the process.

Today, just the interest payments alone on our debt amount to 1/5th of our annual federal tax receipts.

We’ve doubled our debt in the past three years – so there’s a windfall amount of new debt interest payments that will come due over the next five, 10 and 20+ years…

All the while – we’re still taking on new debt every day.

I can’t tell. But at some point in the not-so-distant future, the Treasury will have to monetize its debt. That means they’ll have to have the Fed print money just to make interest payments. Every new dollar minted to pay down the debt will further unravel the dollar’s value – and Treasury holders will see the real value of their securities shrink substantially.

What will eventually happen is that Treasuries will be shunned by investors. More and more people will see Treasuries not as secure savings vehicles, but as guaranteed money losers.

And everyone will rush to sell their Treasuries at any price. After that, yields on new Treasuries will necessarily have to rise.

As I said yesterday, when this bubble pops, I expect commodities to benefit for the simple reason that they’ll be perceived as one of the only safe asset classes left.

And even if 1/10th of Treasury investors flock to commodities, that would be $1.6 trillion flooding into the sector.

Exciting times to be a commodity investor.