Time to put away the beach chairs and suntan lotion, traders. Summer is almost over. Get the kids ready for school.

And get back to work. The market missed you.

It’s lonely on Wall Street. Nobody is trading. August has been a dead month. Boring.

But let’s not dismiss the summer quite yet. The S&P 500 is up a tidy 7% since Memorial Day, although most of that occurred in June. Volume and volatility may have been low, but the gains were solid.

So now the question is what should you do in September. Volume and volatility will likely increase. Is it time to jump in?

Seasonality is not your friend

It may seem that September should be a solid month for the market. After all, traders are returning to the market after vacations. Kids are in school. It’s time to get back to work.

But that’s not the case. In fact, September is historically the worst performing month of the year. According to the Stock Trader’s Almanac, the average September return since 1950 is -0.8% for the Dow and -0.5% on the S&P 500. September is the only month that has had more down than up years.

Last year, the S&P 500 dropped more than 7% in September. That probably won’t happen this year, but you’ve been warned.

Have you heard about the election?

The upcoming presidential election has the market in a bind. Right now, the election is a toss-up, if you believe the polls. If you believe the markets and betting sites, Obama may have an edge (we’ve written about both and gotten an overwhelming response from readers). But nobody really knows.

And the impact either candidate may have on the market is anyone’s guess, too. I get the sense that traders aren’t weighing in on one side or the other. So uncertainty rules. And the market hates uncertainty. It tends to breed caution. There’s no conviction. And that makes it tough to sustain a rally … say, like the one we’ve had this summer.

Don’t look at the charts

While the summer rally has been solid, the market has been in stall mode for the past few weeks. In fact, the S&P 500 is flat for the past three weeks on little volume.

One reason for the stall may be that the market is bumping up against a multi-year high last reached in April. The chart is forming a double top around 1,420 for the S&P, around 13,300 for the Dow, and 3,100 for the NASDAQ. The last time the market saw these highs was in early 2008. 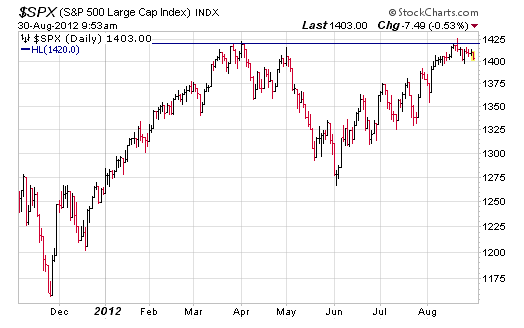 So with seasonality and election uncertainty working against the market already, technical resistance is just adding insult to injury. Or injury to insult.

The old saying is that the market “climbs a wall of worry.” In other words, you need skeptics and naysayers to keep a rally intact. Why? Because the nervous nellies are sitting on cash that will eventually find its way into the market once the latecomers realize they’re missing the rally train.

No fear means less buying power to give the uptrend legs.

So how do we measure this fear? The CBOE Volatility Index (VIX) – often referred to as the “fear index” – is a measure of the market’s expectation for volatility over the next 30 days. It is based on the premium paid for options on the S&P 500 Index. A relatively high VIX means that investors are fearful and are willing to pay more for put options to protect their portfolios. A low VIX signals complacency, as investors are less interested in buying protection.

Right now, the VIX is coming off a low around the 15 level. For the past two years, a similar bounce has been accompanied by market weakness. Complacency in the market is being unwound into some selling. (My colleague Andy Crowder recently offered up an excellent analysis of the VIX effect.) 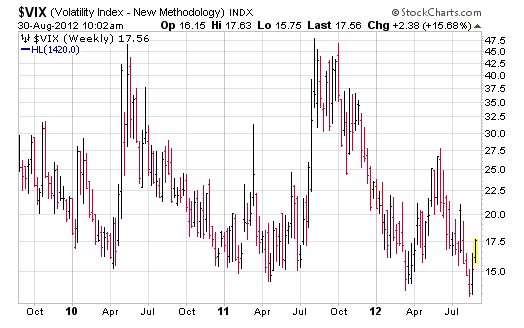 In simple terms, the VIX and the market tend to move in opposite directions. Look at the last time the VIX popped off the 15 level – from mid-March to the end of May. The S&P 500 dropped 10% during that period. The current bounce is just getting started. And if it lasts about as long as the last one, it will bring us right into Election Day. Hmmm, coincidence?

So wade into stocks next week at your own risk. Just because volume increases, it doesn’t mean you have to join the party. You don’t have to sell your holdings. But you may want to wait a month or two before committing new capital to a market that is facing some significant headwinds.