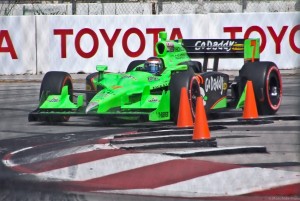 The domain registry and Internet services company declared first-quarter earnings after the closing bell on Tuesday. While the event certainly wasn’t the unmitigated disaster it could have been following such a hot initial public offering, the GoDaddy earnings report clearly failed to impress investors.

The funny thing is, the report wasn’t terrible. GoDaddy declared that it generated more revenue during the quarter than analysts were expecting. The GoDaddy earnings report also contained second-quarter and full-year guidance that was above analyst expectations.

It would be safe to say that anytime you see revenue growing faster than expenses it is a good sign.

But there is also bad news.

Despite the positive metrics listed above, the company still lost $43.4 million during the quarter, roughly $0.34 per share. Yes, this loss is considerably lower than the $51.3 million – roughly $0.40 per share – lost in the same quarter of 2014. But this is hardly a good sign for an 18-year-old company operating in the highly competitive and saturated domain hosting market while trading at a premium stock valuation.

It’s also concerning that the company declared earnings in line with expectations, announced strong metrics and reported revenue above expectations – only to see the stock fall in response.

The takeaway here is that if you’re running a company that just completed a high-profile IPO in today’s hot market, it is expected that you should beat analyst projections.

I’ve been pretty critical of the company since I scanned through its IPO paperwork back in March, because, put simply, the deal was not structured in a shareholder-friendly way. In fact, with the exception of some financial engineering that will allow the company to pay down debt and take advantage of some tax savings, the deal was essentially structured to benefit existing investors like founder Bob Parsons and multiple private equity firms.

Despite my criticism of the IPO and my skepticism toward the stock, there are certainly some bright spots in the earnings report.

GoDaddy continued to post decent growth in revenue, bookings and a couple of other key metrics. But the dark cloud hanging over the company is the fact that, in the last five years, it has not managed to turn a profit. In fact, the company is forecasted to continue losing money until fiscal year 2017, when it is forecasted to barely break even.

The GoDaddy earnings report may have failed to impress investors but, frankly, I’m not impressed by anything about GoDaddy.