While the company’s search division remains under pressure, a major cycle of capital expenditures seems to be slowing. That said,  the company stated that spending on wild things like self-driving cars and curing mortality will continue.

Are these numbers slightly worse than expected? Yes. But when you consider that quarterly net income rose around 40% on a year-over-year basis, I hardly see cause for concern.

Google has enjoyed dominance over search going almost all the way back to when the masses began using the Internet. The company’s AdWords product, through which businesses buy advertising associated with certain keywords or key phrases, remains a high-margin revenue generator. Advertising revenue in general accounted for roughly 89% of all Google’s total revenue in both the fourth quarter and in 2014 as a whole.

That means Google is highly dependent on search and advertising for its revenue.

It is certainly worth noting, however, that Google’s dependency on advertising revenue slid from 91% to 89% from 2013 to 2014. And when you consider that Google first earned all of its revenue this way, this declining dependence on advertising revenue is clearly a trend. What’s more, this is a trend that I expect to continue as Google begins to branch into products like self-driving cars, robotics, internet-connected devices and much more.

Google investors should welcome this trend, as it means Google is diversifying its income. This is vital as advertising growth slows and competition from companies like Facebook (Nasdaq: FB) intensifies.

Some of these new products have been added to Google’s portfolio through acquisition – Nest, Dropcam and Boston Dynamics are among the more high-profile acquisitions. However many of Google’s most promising ventures have been developed in-house by Google’s secretive Google X division, headed by co-founder Sergey Brin.

On the Acquisition Trail

The real Google story remains its promising new ventures and the industries it is entering through acquisition.

The company technically became a military contractor a year ago with its acquisition of Boston Dynamics, a robotics company currently working on several projects for the U.S. military. It’s one of a series of robotics acquisitions Google has pursued.

In its iconic search business, growth of paid clicks may be slowing and the amount Google charges for these clicks is decreasing slightly. But these are still huge numbers and Google is still by far the dominant player in search.

The chart below illustrates this dominance, roughly 75% of the U.S. market for search traffic. 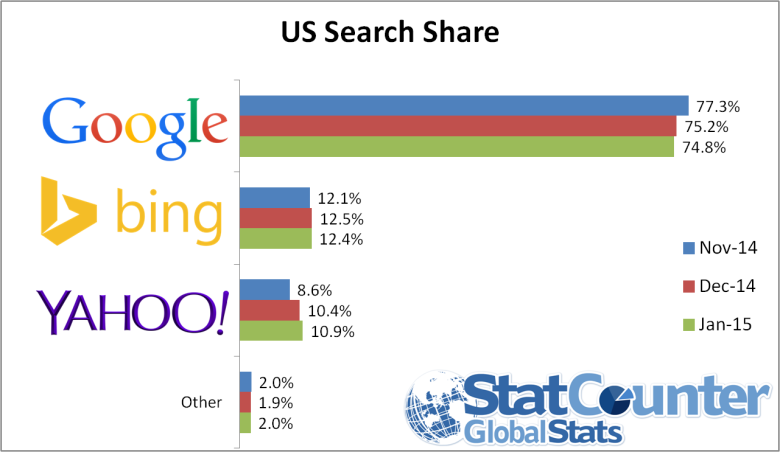 The key takeaways from Google’s earnings report are that its search dominance is intact while its profitability in search remains solid despite pressure from stiff competition.

So, Google’s fun stuff – the partnership with SpaceX to blanket the globe with Internet access using satellites, self-driving cars, robots, smart home technology, etc. – is just long-term icing on the cake that is remains tasty in the short-term.