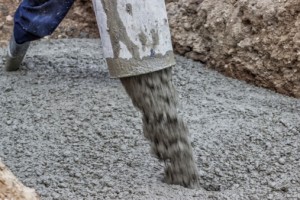 One of the trends I’ve written extensively about here in Daily Profit is the steady recovery in the housing and construction markets. Recently I covered the state of the housing market, and I also wrote about ways to play a construction recovery. Today, I want to share one specific stock to play this growth trend.

I should disclose that I own this stock, and it’s also been covered in the Game Changers portfolio since April 2014. And I also want to come right out and state that part of the reason I want to share this idea with you is to entice you to get a trial subscription to Game Changers. We have an average gain in the portfolio of 77% right now, including a 650% gain in Ambarella (NASDAQ: AMBA). You can get a trial subscription by clicking here now.

OK, that’s my pitch. Back to the idea of the day, which is a really basic way to play a rebound in construction activity. I’m talking about ready-mix concrete.

Mix together some aggregate, sand, Portland cement and add a little water and you have concrete. It doesn’t get much more basic than that.

Concrete’s simple yet proven recipe has made it a must-have building material. Almost every building utilizes some form of concrete, whether in a foundation, slab, walls, ceiling, walkway, etc. The uses are only limited by the imagination.

On a ton-for-ton basis, concrete is the most widely used building material on the planet. Twice as much concrete is used as steel, wood, plastics and aluminum combined. The World Business Council for Sustainable Development states that concrete is the second-most consumed product in the world. Water is the first.

I could go on, but you get the point. Concrete is a critical material in residential and commercial construction, which is an extremely large, and growing, segment of the U.S. economy.

The concrete industry generates roughly $30 billion in annual sales in the U.S. Most of that (65%) is spent on public works projects, while around 20% goes to residential projects. The remaining 15% is spent on commercial and industrial projects.

If you believe, as I do, that the U.S. construction market will continue to recover over the next five years, having a little exposure to concrete is almost a no-brainer.

As the chart below shows, U.S. construction spending (including residential, commercial and public) has been growing at around 8% annually over the past three years. And it’s up 33% from the February 2011 low of $755 billion/year and on pace to top $1 trillion in 2015. 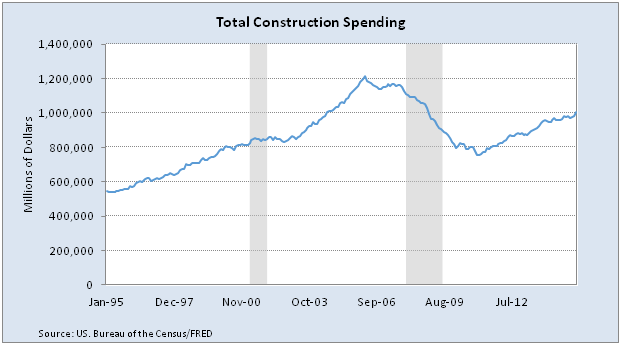 Investors can jump into concrete with a pure-play small-cap company that has been in recovery mode since the housing bust.

There aren’t that many pure-play concrete stocks out there, since the industry is extremely fragmented. The three names that are most commonly tossed around are Cemex (NYSE: CX), Vulcan Materials (NYSE: VMC) and Martin Marietta (NYSE: MLM).

But my favorite concrete stock is U.S. Concrete (NASDAQ: USCR). It has a market cap of $560 million and is based in Euless, Texas.

After divesting assets in the pre-cast concrete market (think stairs, water tanks, etc.), U.S. Concrete is now 100% focused on ready-mix concrete and aggregate (which goes into ready-mix). “Ready-mix” just means the concrete is mixed at a batching plant and then delivered to a jobsite in a cement mixer. This is the type of concrete we’re all familiar with.

U.S. Concrete operates less than 4% of these plants. It also has 10 aggregate facilities, which supply the raw materials used in the concrete mix. It has about 1,200 cement trucks.

The company is primarily focused on the higher margin commercial (59% of sales) and residential (26% of sales) markets. Public works projects made up the remaining 15% of sales. (All figures are full-year for 2014.)

This isn’t an overly complex business, so my investment thesis is relatively straightforward, starting with the fact that the company is relatively small and unknown.

U.S. Concrete doesn’t get a lot of press. That’s fine with me because this is a recovering stock in a recovering industry. Adjusted earnings per share of $2.25 represented 89% earnings growth in 2014, as revenue grew by 15%.  Even with that performance, U.S. Concrete is still under the radar.

The stock trades with a current-year price-earnings ratio of 13 based on estimated earnings of $2.90. Granted, with acquisitions activity it’s hard to nail down what earnings will actually look like, but $2.90 represents 29% EPS growth over 2014, which seems entirely reasonable to me.

And just as a couple points of comparison, the forward-year P/E on Martin Marietta and Vulcan Materials is 20, while Cemex has a forward P/E of 35.

Beyond being relatively inexpensive, U.S. Concrete is also leveraged to rapid growth markets. It’s a bit of an obvious statement to say that concrete is a local business. This isn’t the type of product that gets shipped around the globe. So it stands to reason that we want to be comfortable with construction growth prospects in the key markets that U.S. Concrete serves.

I am. The company’s biggest markets are Texas, California, New York, New Jersey and Washington, D.C., which collectively account for over one-third of all ready-mix concrete consumed in the U.S.

Residential building permits in these areas have grown by an average of 35% annually over the past two years, which means U.S. Concrete’s core markets have been growing around 10% faster annually than the national average.

The company has also been on an acquisition spree that should help long-term growth. The two variables that drive the concrete business are volume and price per cubic yard. The more a producer can push volume up – and maintain consistent pricing (if not raise prices) – the more money the business will make.

To drive volume up, management has been buying ready-mix concrete plants and related assets. Since October 2014 it has completed six acquisitions, and it has completed 17 since the beginning of 2012.

I like what U.S. Concrete is doing. Yes it’s a tiny basic-materials company in a competitive industry with low barriers to entry. But it’s taking advantage of the opportunities in front of it in strong markets, and I see it becoming a much larger ready-mix concrete company in a few years.

The stock recently pulled back from around $40 to kiss its 50-day moving average near $36.70. I think long-term investors can add some exposure here to a great small-cap growth story.