Greece debt is back in the news. Will it hold U.S. markets hostage the way it did in 2011? I doubt it. 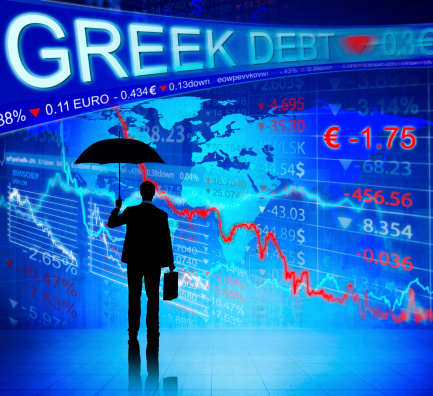 Greece debt still piles higher than the Acropolis. Despite that sad truth, the Greek government wants to get out of its 240-billion-euro bailout program, which includes a laundry list of unpopular austerity measures. And eurozone officials are miffed that the Greeks are trying to bail on their bailout.

A report in Germany’s Der Spiegel magazine alleges that German Chancellor Angela Merkel and Finance Minister Wolfgang Schaeuble are considering allowing Greece to exit the eurozone, a departure from the German government’s previous stance. If Greece opposition leader Alexis Tsipras wins the upcoming election, a Greek exit from the eurozone is “inevitable,” according to the German government.

Why should you care about what happens to Greece? How could a Greek exit from the euzozone affect your investments?

Rewind back to 2011. That was the year Portugal required a 78-billion-euro bailout, Greece required the double-whammy of a second bailout and imposed austerity measures, Italy passed a 50-billion-euro austerity budget and growth across the eurozone came to a screeching halt. It seemed every time you opened up a paper or clicked on Yahoo! Finance, the top headline was something negative about the European economy.

That negativity crossed the Atlantic, seeping into Wall Street’s every pore. As a result, stocks were flat. The S&P 500 failed to make gains for just the second time in a decade. U.S. stocks were never able to build any momentum. Every time they did, a bad financial headline out of Europe gave investors pause and convinced them that their money still wasn’t safe in the wake of the recession.

With Europe back in the news, could we possibly see a repeat of that market uncertainty in 2015? I doubt it.

For one, the climate has changed dramatically in the last three years. We are now nearly six years removed from the depths of the Great Recession, not just two or three years. Fears of a double-dip recession have all but disappeared. Unemployment is the lowest it’s been in more than six years. And stocks entered the year at record highs.

Think about some of the negative financial news that the market has largely ignored over the last few years. Sequestration taking effect? Didn’t slow stocks down a bit. Multiple near-defaults by the U.S. government? Yawn. Unemployment still hovering above historic norms? Wall Street turns a blind eye.

Meanwhile, Europe’s debt problems still linger. They may not be as fresh as they were in 2011. But the eurozone remains a financial mess.

That hasn’t mattered the last couple years. It’s not as if Europe’s debt problems went away. It’s just that Wall Street started to ignore them.

I think U.S. investors will continue to ignore Europe, despite all the ongoing turmoil. This isn’t 2011. It’s 2015, which means the depths of the European debt crisis are one more calendar year in the rear view mirror – at least in the minds of the average investor.

A correction may be on the horizon. But it won’t be because of Greece debt. Not this time.