I have to admit: I’m something of a Jim Rogers fan. I’ve read all of his books. I watch every one of his appearances on TV,
and I study his career and investments extremely closely.

In a world where talking
heads and b-school economists blather on in flowery finance-speak that doesn’t
make a lick of sense, Jim Rogers seems to always speak in a clear, simple and
easy to understand manner.

He speaks the language of
commodities.

And while I always do my own
due-diligence, I put a lot of stock in what he says – sometimes literally.

Even though I know the
commodity train is still running, sometimes it’s nice to put my ear to the
tracks and hear Jim Rogers saying the bull-market is going to roll on – the same things I’ve independently verified
for myself.

For instance, I hear lots of
people saying that while commodities have had a nice run, the bull market in
“stuff” is nearing its end. That begs
the question: how long can a commodity bull market last?

It’s a valid and important
question.

I’m a commodity investor,
but not for sentimental reasons. As much
as I value gold as a hedge against inflation, or oil’s ability to make
my car go vroom – I invest in commodities for fundamental reasons – largely
because I believe they are still cheap and undervalued from a historical perspective.

So, back to the question at
hand. How long can a commodity run
last?

Jim Rogers answers that very
question in his 2004 book “Hot
Commodities.” Specifically, he
references a study by Legg Mason – which found that the average commodity
bull-run lasts between 17 and 18 years. The study also revealed that every commodity bull market in the last 130
years has coincided with a bear market in stocks.

In the chart below, you can
see this trend at work. 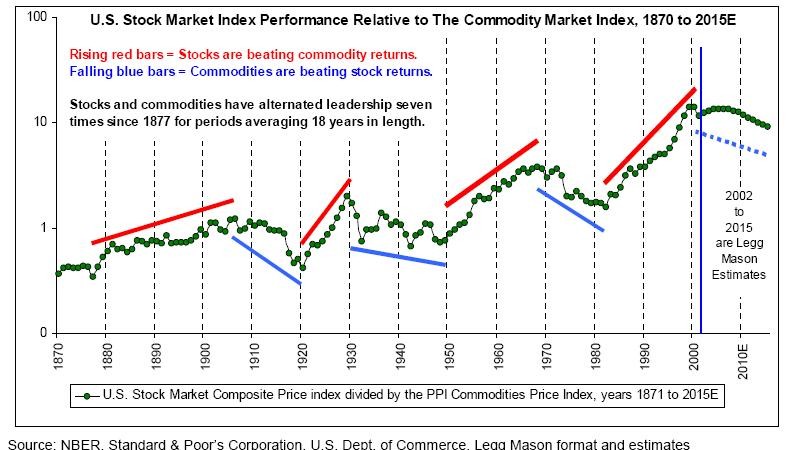 The chart also shows that
we’ve only been in a commodity bull market for 10 years at most. The shortest bull market in commodities was
between 1969 and 1981, a 12 year period. The longest was
between 1930 and 1950, or 20 years.  By historical standards we should have at least 2 years to go before the gravy train slows..

For instance, the inflation
adjusted high for gasoline is $3.57 a gallon. Gas is still selling in the high $2 range. That’s ridiculously cheap, considering we’re
running out of cheap oil. No one has discovered
a significant reservoir of cheap oil for over 30 years. Simply put, there’s no way gasoline at $2.95
is in bubble territory.

But it’s not just gold and
oil that are still cheap. Natural gas
(as I’ve been saying for the past week) isn’t just cheap – it’s almost
impossibly cheap. I don’t know how
natural gas companies can stay in business with prices this low. Natural gas currently sells for just over $4
per thousand cubic feet. That’s the
equivalent of gasoline at 50 cents a gallon. The strongest of these companies are still a screaming deal right now. (Click here to find out more information
about my favorite natural gas company.)

Coal companies, like BHP
Billiton (NYSE: BBL) just raised
benchmark coal prices by nearly 80%, but coal prices are STILL below inflation
adjusted highs of just a few years ago. As I said yesterday, the United States,
China
and much of the rest of the world is slated to use more coal than ever over the
next 20 years. Buying coal companies
today is almost a no-brainer.

The list goes on. Silver is even cheaper than gold right
now. It’s not even close to its nominal
highs of $50 an ounce in the early 1980s. Copper has nearly doubled in the past year from $2 to $3.50 per pound,
but it’s 75% cheaper than inflation adjusted highs of over $14 a pound in the
mid 1970s.

Okay – you get the
idea. My point is: commodities are still
undervalued. It’s a long-term trend
that’s still unwinding. The numbers
don’t lie. And neither does Jim
Rogers.

If you think like Jim Rogers
and I do, that the commodity bull run still has plenty of steam, I encourage you to click here to sign up for a trial subscription
to Energy
World Profits. It’s filled with
today’s best commodity investments – and it’s entirely risk-free. If after the 90-day trial you’re not
completely blown away by the research, you’ll get a full refund. No questions asked.

By the way, there’s one big
sector of commodities I haven’t talked about: food.

It’s the same story there too. Nearly everything is phenomenally cheap. But I’ve run out of room today. I’ll talk about my favorite
food-commodity investments in an upcoming issue of Resource Prospector.