A widespread drought is upon us.

As a result, opportunities are plentiful because short to intermediate-term extremes have been reached.

Look no further than the Teucrium Corn ETF (NYSE: CORN). 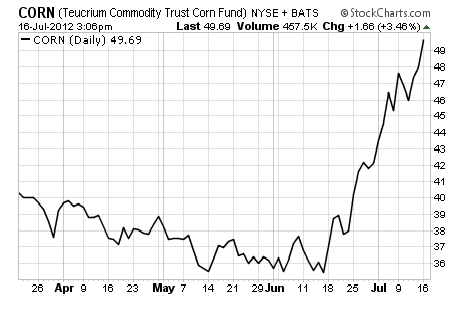 From afar, it looks as though the ETF isn’t very liquid. The three month average volume only stands at slightly over 100,000. However, if you look a little closer you will quickly notice that the last months has seen a huge pop in volume….enough to safely make a small trade.

The month-long climb has pushed CORN to heights not seen since late last August, when the ETF quickly tumbled from roughly $50.00 to $39.00.

Now that the ETF has moved back to the $50 level coupled with newfound liquidity (fairly tight bid-ask spread) and an implied volatility of over 40% it might be prudent to start sifting through a few potential trades.

Of course there are numerous ways to trade CORN , but with the ETF currently trading at $49.71 and in a short-term overbought state I might look towards a spread like the August 55/57 bear call spread. The probability of success on the spread is 76%. I would not take less than $0.35 for the spread. That would equate to a 17.5% gain over the next 32 days (August expiration).

Basically, the trade would be a success if the trade stays below the short strike of 55 over the next 32 days. Preferably, for a short-term trade, it would be best if the underlying moved sharply lower over the next 1-5 days.

The strategy is something that I will be discussing at length in my upcoming webinar. If I were trading this spread I would place a limit order only because the liquidity is not as tight as that of the major market ETFs like SPY, QQQ, IWM or DIA.

Furthermore, I would use any decline to exit, at least a portion if not all of the position. The trade is more of a shorter-term spread trade and one that might last a few days to a few weeks. It truly depends on the price action of the ETF.