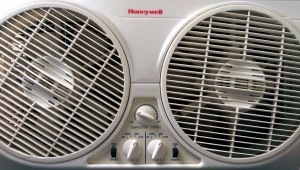 The stock is down just 3% year-to-date, mirroring the broader market, which is much better performance than its peer group. Honeywell shares have increased 16% in the last 12 months and have outperformed the broader market in that time.

Honeywell has performed better than many other industrials, as it has less exposure to the oil and gas industry than many of its peers. Still, currency remains a big issue for Honeywell. Its sales and profits continue to be eroded by a very unfavorable currency environment.

Throughout earnings season, large multinational industrial companies such as Honeywell are echoing a familiar theme. They are managing to beat analyst expectations on profit, thanks to significant cost-cutting efforts. But revenue is missing analyst forecasts, due primarily to the rising U.S. dollar.

Over the past year, the U.S. dollar has strengthened significantly against most international currencies. It’s a real headwind for multinational companies like Honeywell, which derive a high percentage of revenue from outside North America. That’s a problem, because when the dollar rises, it makes revenue generated overseas worth less when it is converted back into the domestic currency.

For instance, Honeywell earned $1.26 billion last quarter on $9.61 billion of revenue. Earnings per share came in at $1.60, which beat expectations of $1.55 per share. However, revenue missed forecasts, which called for $9.85 billion.

Meanwhile, Honeywell has maintained an optimistic long-term outlook, demonstrating confidence in the strength of the underlying business. Management believes revenue will grow 4%-6% per year in the five-year period ending 2018. The company expects innovation to drive organic growth, and continued cost controls should produce double-digit earnings growth over the forecast period.

Honeywell believes international growth will be a strong driver for the company over the long term, despite the short-term headaches from currency. From 2003 to 2013, Honeywell grew U.S. revenue by 3% compounded annually. During the same time frame, revenue from outside the U.S. rose by 9% compounded annually. The result is that international revenue now constitutes more than half of Honeywell’s total revenue.

Emerging markets will be a pivotal focus for the company. Within its international growth over the last decade, underdeveloped regions have performed the best. Developed international economies grew revenue by 6% from 2003-2013, while high-growth emerging markets grew at a 15% compound annual rate in the same time.

Consequently, Honeywell’s long-term focus has not changed, even though the currency environment has turned against the company this year.

A Strong Company During a Tough Time

Honeywell is enduring some significant challenges, mostly in the form of currency fluctuations. But it remains a strong business. One indicator of that is Honeywell’s organic revenue and earnings, which exclude the effects of foreign exchange movements. On that basis, organic revenue actually grew 1% last quarter.

This year has been frustrating for investors, but the company is doing everything within its power to grow the business over the long term. If and when the foreign exchange environment reverses, Honeywell’s results should dramatically improve.