Everyone knows that European countries are broke. And many of their banks are broke too. The European financial system is tied together in a multi-cord knot pulled taut between the European Central Bank (ECB), individual country banks and commercial banks in the Euro zone – and they've been hoping that it won't come all unraveled.

When I say it's a multi-cord knot – I mean that literally. Look at this infographic showing the tangled mess of who-owes-who.

That confusing mess is by design. The strategy to keep the Euro afloat is based entirely on making it impossible for the market to figure out how much debt is really out there.

And like all tangled knots, in order to get this one apart, eventually one of the cords will be cut when a country leaves the Euro zone.

The frayed cords are everywhere – but one of the biggest fraying cords is in the French banks.

I won't get into the boring details, but thanks to a new loophole, French banks are now being allowed to print money into existence.

It's a new regulation for 2012 that comes direct from the ECB. Remember – the ECB is supposed to be the steward of the Euro. It was the ECB that demanded Greece get its house in order. It's the ECB that cracks the whip over every Euro-zone member to try to keep them all in line.

But this new regulation allows any of the Euro-zone member banks to do something very interesting. No, they can't actually print Euros. That would be too transparent and easy for the markets to pick up on.

It's a little confusing – because it's just surreal that it's even happening.

If you or I needed to keep our bank account from dipping below the minimum balance, we'd have to come up with actual dollars. We can't do what French banks do, and just create a bond that's worth whatever we need it to be worth and then deposit the fake bond. 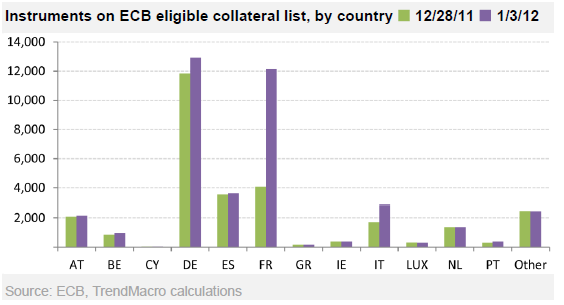 You'll notice Italy also added about 1,000 of these bonds to their ledger as well.

For a specific example, I'll quote the Financial Times story where I learned about these fake bonds.

In case you're not an expert on lousy European banks, UniCredit is one of Europe's largest and most insolvent banks. The story doesn't come out and say it, but it looks like UniCredit wrote itself a fake check for ?7.5 billion (worth about $9.5 billion) in order to recapitalize itself.

We're so far beyond the rabbit hole right now. Banks in Europe are essentially printing money to keep themselves capitalized. I don't know how much longer these shenanigans will go on.

But the overarching point is that we're in the midst of an international currency crisis. And right now, the Euro part of this crisis is pinching the balloon and swelling the dollar.

Eventually the air will be let out of both, and people will flock to gold in an unprecedented fashion.

Use this crisis to trade your inflated dollars for more gold and silver.