After six weeks of corporate financial reports, earnings season is finally coming to a close.

It wasn’t exactly a banner earnings season full of glowing results. But the reports were good enough to support current stock prices amid a barrage of potentially damaging headwinds.

There are many uncertainties on the horizon. And we know that the market hates uncertainty.

Ben Bernanke and the Fed’s talks of tapering off their $85 billion-a-month bond buyback program have been a major source of investor trepidation. Lingering debt problems in Europe have been another concern. And now the impending missile launch on Syria has investors worried about oil prices and geopolitical instability.

Ordinarily, those would be enough to spark a pullback, particularly because the S&P 500 was just off record highs entering Q2 earnings season. Instead, stocks have actually moved sideways since Alcoa (NYSE: AA) kicked off earnings season on July 8. Corporate earnings have been encouraging enough to counterbalance some of the not-so-good global news.

With only a handful of companies left to report, 72% of S&P 500 companies beat earnings estimates and 55% exceeded revenue estimates in the second quarter.

Year-over-year earnings growth accelerated to 3% last quarter, slightly above the trailing 12-month average of 2.8%. As a result, profit margins are now at their highest level in at least a decade.

The financial sector was the driving force behind the strong earnings. U.S. bank earnings grew a whopping 28%. And 79% of financials beat earnings estimates – tops among S&P 500 sectors.

No other sector grew by more than 4.6%. In fact, several sectors including technology, energy and materials saw their earnings decline.

If not for the banks, this earnings season would have been rather underwhelming. Take away financials, and earnings growth would have actually been in the negative at -2.9%. Energy and basic materials were especially weak at -9.3% and -9.5%, respectively.

The banks saved the day this earnings season. Next season we might not be so fortunate.

Third-quarter guidance calls for earnings growth to slow. Of the 103 S&P 500 companies that have issued guidance for the third quarter, 85 of them predict earnings will fall. The pessimistic view has thrown cold water on what analysts were initially expecting to be a red-hot third quarter.

But don’t put too much weight on those predictions. After all, last quarter analysts forecast only 0.6% earnings growth. Actual results came in at 3%. Earnings estimates are often on the conservative side, which is why 65% to 75% of earnings reports usually beat estimates.

That said, corporate earnings have never been more important to the U.S. economy (see chart below). 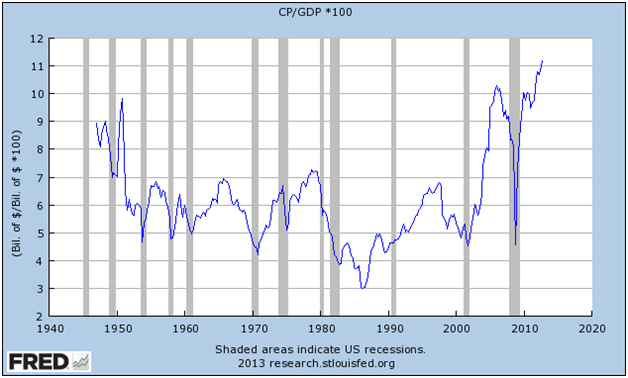 They currently account for more than 11% of GDP – more than double what it was at the height of the recession.

As profits continue to grow, earnings season will become increasingly crucial to how stocks perform. This season they were a savior. Let’s hope that continues through the remainder of 2013.