Six months ago, Ian Wyatt and I started a service called High Yield Trader and made our first investment for the portfolio…we bought Microsoft stock.

The idea was to buy shares of the blue-chip, shareholder-friendly tech behemoth… and then sell someone the right to buy those shares from us at a higher price. The practice is better known as “covered calls.”

Our original goal was to basically double the 3.4% dividend, and earn a save 7% yield.

The results have been remarkable. After just five months, well, we’ve more than doubled the dividend. In fact, we’ve nearly tripled the dividend and now estimate that we’ll make an additional 8% in income over the next seven months.

And if you’re willing to learn the basics of this strategy, you can still use Microsoft to safely collect 6-8% per year.

Let me show you how it works…

In our original trade back in late April 2013, we noted how you could buy shares of Microsoft (NASDAQ: MSFT) for around $31.50 and simultaneously sell the June $33 calls for about $0.40.

In other words, we were buying shares for $31.50, then selling someone the right to buy them from us for $33 per share.

We earned a “premium” – also known as income – of $0.40. And that provided us with an immediate 1.3% yield on the original stock position. And the options had a lifespan of less than two months.

To drive the point home, let me cover the trade in “real money” terms…

We bought 100 shares of Microsoft for $3,150. We collected $40 in super-low-risk premium for selling covered calls on Microsoft. And once those calls expired or called away, we do it all over again.

An 8% annual income stream on the $3,150 stake is $252. That’s an extraordinary amount of extra income coming from a great blue chip stock like Microsoft. And remember that’s only based on the bare minimum of 100 shares.

Now… you might be thinking, “You’re not telling us the full story. You can’t repeat that trade all the time.”

But… two months later… in late June, I essentially made the same trade with the same stock. We were able to bring in another 1.5%. Not only that, but we did it once again in August for a 1.3% gain.

So far we’ve managed to produce a total income of 8.8% over the past five months.

Keep in mind, Microsoft shares didn’t have to “soar” for us to earn this extra income. We made money as the stock climbed, moved sideways, or even declined a little.

Microsoft has spent the last five months moving sideways…Yet you could have used the stock to build a covered call position that would have produced almost a 9% yield.

The calls expire in November, just two months from now. If the stock stays where it is or moves lower, you keep your shares… and you can sell another round of calls. Making this trade six times in a year will produce a 12% return.

If the stock has moved higher by then, you’ll sell your shares at $34. That will give you a 3.8% return. And you can do it all over again. Making this trade six times in a year will produce a 23% return.

Add in the annual 3.4% dividend Microsoft pays, and you’re collecting between 12% and 23% a year on one of the most dominant stocks in the market.

All you have to do is learn the basics of this approach and put them to work for you. If you are interested in learning all the details, please click here now.

As you can from the chart below there’s a reason why High Yield Trader is our fastest growing service at Wyatt Investment Research. 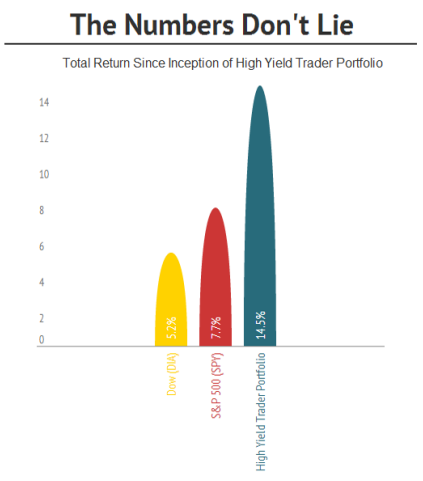