The good news is that stocks are up. You don’t have to read the newspaper very closely or listen to the shills on TV or radio to come to this realization.

And unless you were unlucky enough to back up the truck during the highs of 2000 or 2007, you’re probably sitting on decent percentage gains in your stock positions. 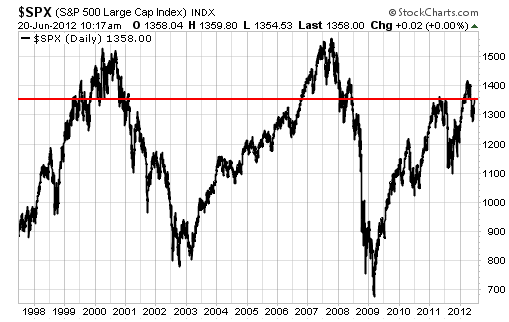 It’s been tough to buy stocks over the past 15 years and not be in the black.

But what’s the real story? Stock charts don’t calculate for inflation. The chart above of the S&P 500 only gives us an idea of our potential percentage gains BEFORE inflation.

If this chart were inflation adjusted, it would look much, much different.

But hold on. It gets worse…

Because if you sell your $1,500 position today, you’ll be taxed at the capital gains rate of at least 15%.

There go your profits, because after taxes your real gain is whittled back to $10 in 1998 dollars – or just a 1% gain on your initial investment!

That’s pretty amazing if you consider that, on paper, you supposedly have a 50% gain.

It also underscores how easy it is for the thieves in Washington to rob every single person who holds dollars – and how most people will never notice, let alone voice their anger.

And imagine how much further real assets like gold and silver will rise as more and more people wake up poorer every day – even though their bank statement and brokerage account says they’re richer.

Outrage will force them to turn to the safety of precious metals – just as it has turned you and me. Because you can only break in to someone’s house and steal their possessions so many times before they buy a better lock for the door. Gold and silver are a better lock than the dollar.