The U.S. isn’t the Weimar Republic.


Inflation is not going to spiral out of control.

A Zimbabwe type of currency destruction will not occur.

A wheelbarrow filled with money will be more than enough to buy a loaf of bread.

Many investors are treating inflation as a certainty because the Fed has expanded its balance sheet to unheard of levels through its quantitative easing strategy. Some have even gone so far as to say that this program will utterly destroy the U.S. currency.

Though I can agree that CPI will increase, it’s unlikely to show a gain of 5% in the near term. Despite the astronomical rise in the Fed’s balance sheet, CPI has been below 4% every month since September 2008. In fact, monthly CPI hasn’t ticked above 3% this year.

Runaway inflation that would devastate the dollar seems unlikely given those official statistics. Yet many people fear that the dollar will shrivel into a useless ball of print because of the Fed’s policy.

To demystify this conclusion, I’m going to explain quantitative easing and why the Fed is using this monetary strategy. Afterward, I’ll explain why gold is still positioned to rise even if inflation continues to be low.

Though his policies have been controversial, Ben Bernanke has had to take drastic measures to support the economy. That’s because the 2008 recession was no ordinary recession. So typical Fed techniques were useless.

Like it or not, the U.S. is a credit economy. Consumers borrow money to buy goods. Growth is limited only by the willingness of borrowers and lenders to receive and extend money.

However, on occasion, the system breaks. And it’s up to the Federal Reserve to police it when that happens.

Occasionally, economic growth slows and a recession occurs. But recessions are relatively straightforward for the Fed to fix. Typically, interest rates drop, increasing the incentive to borrow money, which results in increased spending, investment and production.

Though lowering interest rates usually gets the economy pumping again, it has problems during deleveragings. There is simply too much debt in the system.

In deleveraging, the demand for new loans completely falls apart because people are paying their debt down. Those with debt have too much of it, and no desire to take on more – even at extremely accommodative rates.

A credit-based economy only functions when debt is being acquired. And it’s up to the Fed to make this happen.

Deleveragings are nasty beasts compared to recessions and require a number of tools to fix.

And much like baking a cake, all these ingredients are necessary in order to beat deleveraging and prosper.

Of them, wealth distribution (higher taxes), austerity (spending cutbacks) and lowering breakeven basis (decreasing costs and firing workers) cannot be controlled by the Fed. Additionally, the Fed’s ability to assist debt restructurings (via lowering interest rates on obligations) is limited by the 0% threshold.

Quantitative easing is one of the more recent unusual policies implemented by central banks. It’s distinguishing feature is the buying of assets from commercial banks. The Fed’s asset purchases increase excess reserves at banks while raising the prices of the assets purchased (lowers interest rates for bonds). Banks should be more encouraged to lend cash as their reserves increase and become more liquid.

To boost lending, the Fed purchased more than $2.1 trillion in non-governmental assets from banks. More recently, Ben Bernanke announced an extension of this buying program. In the latest extension, the Fed will buy $40 billion in additional assets per month.

Since the Fed is creating money to pay for these purchases, many believe that inflation will spiral out of control. However, the money supply hasn’t changed much, making runaway inflation unlikely. 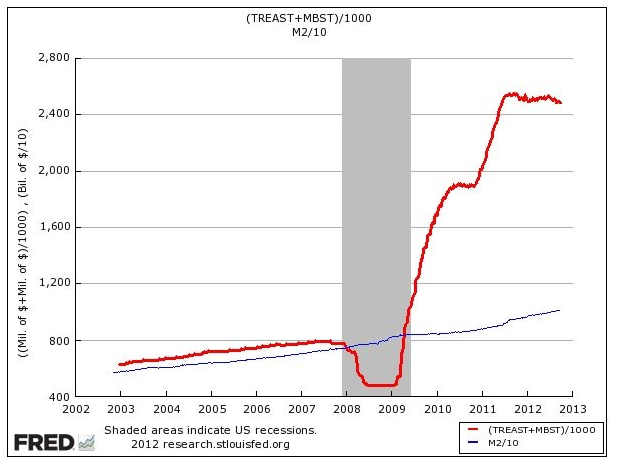 The red line is the Fed balance sheet, including all the Treasuries and mortgage backed securities, it’s purchased. The blue line is M2 (divided by 10), which is a measure of money supply. This line has increased at the same rate since 2003 and we haven’t had any episodes of heightened inflation.

Though inflation is subdued, gold prices have moved higher during the past four years. Moreover, this bullish trend should continue. In my next article of Daily Profit (next Monday), I’ll  focus on why gold is a great investment even if inflation remains low  … Stay tuned.