It’s a very exclusive club intended for only the world’s elite economies, opened in 1969.

I’m speaking of the International Monetary Fund’s SDRs (Special Drawing Rights). This international reserve asset had consisted of only four key currencies: the U.S. dollar, the euro, the British pound and the Japanese yen.

But now, the first of the world’s emerging economies – China – has been granted access. On Nov. 30, the IMF added China’s currency, known as the renminbi or the yuan, to the SDR basket. Its weighting in the SDR basket is 10.92%.

In effect, the IMF’s China currency decision was just confirmation of reality in international finance. China is the world’s largest exporter and will soon pass the U.S. as the biggest importer.

2015 has already been a watershed year for the “redback.” It passed the Japanese yen as the fourth-most-used currency for trade and is rapidly closing on the British pound for No. 3. The U.S. dollar and the euro are No. 1 and No. 2, respectively. 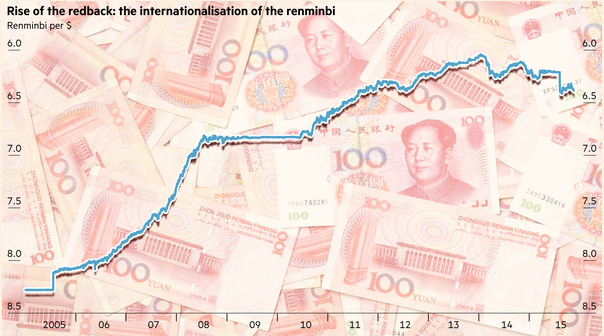 More than 1,000 banks in over 100 countries now use the renminbi for payments with China. It is used to settle nearly a quarter of China’s vast trade. Standard Chartered forecast that number will rise to 38% by 2017 and to 46% by 2020.

The actual numbers are more startling than the percentages. As recently as 2011, only $212 billion of China’s annual trade was settled in renminbi. By 2020, Standard Chartered says the figure will be $2.6 trillion!

That estimate could end up being conservative. Early this year, HSBC conducted a poll of 1,610 executives in 14 countries. More than half said they will begin using the renminbi in their transactions with China in the near future.

Adding to that will be the almost guaranteed investment flows.

Central banks and sovereign investment funds are forecast to move some $300 billion in assets to the renminbi by 2020. Then of course, we have institutional money. That may conservatively add another $200 billion or so.

Much of that money will flow into China’s $6.5 trillion domestic bond market. 2014 alone saw a 78% increase in the holding of Chinese domestic bonds by overseas fund managers.

In July, Beijing said that central banks, sovereign wealth funds and supranational institutions may begin to freely trade in their bond market. I expect Beijing to further ease, allowing basically anyone who wants to trade bonds there to do so.

The renminbi’s use will also climb thanks to China’s “New Silk Road” plan. The plan is formally known as “One Belt, One Road.”

In simple terms, it is China’s grand plan for a new “silk road” in Eurasia. The “road” will be major infrastructure projects – railways, highways, ports, airports, etc. – all built by China. More than 900 projects – worth over $890 billion – are underway or on the drawing board.

The plan should help alleviate the chronic overcapacity in China’s construction and materials sectors. And most funding for the projects will be in renminbi-denominated instruments such as bonds, adding to demand for the currency.

Significantly, all of these bond sales will not occur in China. In September, Beijing eased rules on its companies selling renminbi bonds overseas.

A likely center for many Silk Road-related bond sales will be in London. The central bank – the People’s Bank of China – is already selling one-year renminbi debt on a regular basis in London – and at a decent rate of 3% or so.

Perhaps someday, the renminbi bond market will surpass the U.S. Treasury market in size. Even if it doesn’t, the bottom line is that the renminbi is here to stay as one of the world’s elite reserve currencies.

How can U.S. retail investors get involved? Here are the four best ways, in my opinion:

I personally like CBON fund the best, but KCNY is interesting. With China’s flat yield curve, you don’t need to go out in maturity to get a decent yield.

Finally, there is a mutual fund that invests in Chinese bonds and cash deposits – the Guinness Atkinson Renminbi Yuan & Bond Fund (GARBX).

Keep in mind that these funds will not give you the rush of a hot tech stock. But they will move up gradually as the renminbi appreciates in the years ahead.