84% of American communities have a self storage facility of some kind and 9% of us rent at least one storage unit. The industry is growing, with overall capacity rates rising year after year. But occupancy rates are rising as well, signaling great strength in the self storage business. It’s no surprise then that investors are looking to the self storage industry for both steady income and growth.

You might be wondering how to invest in self storage. Fortunately there are several great options for investing in storage facilities and none involve the actual work of building, marketing and managing a storage facility.

Amerco, the parent company of U-Haul, isn’t the most obvious choice when it comes to investing in self storage. The company is best known for its nationwide network of rental vans and trucks but U-Haul has also built out a network of what it calls “moving services.” For example you can buy U-Haul boxes and have metal storage pods – called U-Boxes – delivered to your home or office then shipped to your destination. 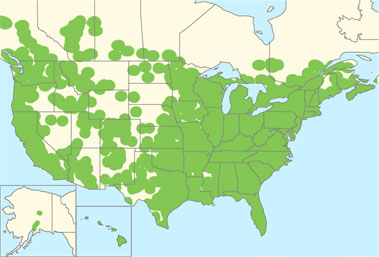 In May the company reported that self storage revenue in fiscal year 2014 increased 19.1% compared to 2013. The company also increased storage capacity by about four million square feet in the last two years.

With a household name and “the most coverage in North America,” the company is well positioned to do well in the self storage industry.

Invest in Self Storage: REITs

REITs – Real Estate Investment Trusts – are a great way to invest in the self storage industry.

There are four REITs that dominate the space. These four companies control about 7% of the US self storage market and will likely consolidate the remaining market by acquiring storage facilities across the country.

1. Public Storage (NYSE: PSA) is the dominant player in the industry based on market capitalization, rentable square feet and footprint. The $29 billion company owns 49% of Shurgard, a European self storage company, as well as around 2,000 storage facilities in the US. Public Storage operates in 38 states and the company boasts more than 140 million square feet of rentable storage space. The company pays a 3.3% dividend.

2. Extra Space (NYSE: EXR) is second by size with a market capitalization of just over $6 billion. It operates over 1,000 storage facilities with over 59 million square feet of rentable storage space across 38 states. The company pays a 3.5% dividend.

3. CubeSmart (NYSE: CUBE) weighs in just under $2.7 billion in terms of market capitalization. CubeSmart has around 366 locations nationwide and 24.7 million rentable square feet. Its dividend is around 2.8%, the lowest of the 4 REITs.

4. Sovran Self Storage (NYSE: SSS) operates Bob’s Self Storage and is the smallest of the four REITs although, at $2.5 billion, it’s not much smaller than CubeSmart. Sovran owns around 400 properties and manages another 77 with a total of 32.5 million rentable square feet and 40% of its business coming from Florida and Texas. Sovran pays a dividend of around 3.5%.

U-Haul and the four REITs are all great ways to gain exposure to rising self storage industry. And while it is important to know how to invest in self storage, knowing which of these companies is most attractive is much more important. Tomorrow we’ll take a closer look at these companies to decide which make the most sense for investors.